The Muse and the Marketplace 2019 kicks off on April 5th at the Park Plaza Hotel in Boston. This year’s theme is writing in a time of upheaval — whether such upheaval is personal, political, artistic, or all of the above. In anticipation of the conference, we’ve asked Muse 2019 presenting authors to describe a time when it was impossible for them to write, but they wrote anyway. How did they do it? What did they write? Our next presenter in the series is Val Wang, author of Beijing Bastard.

At the baby shower for my twins, someone with teenaged twins told me it was going to be hard but assured me that three and a half was the magic age when it would start to get better.

Hard? Motherhood unscrewed my head and replaced it with a diaper pail. Once I took a pile of dirty dishes to the kitchen sink and found myself standing in my bedroom, unable to remember my own name. I somehow managed to get through edits on a book I’d been working on for 10 years. After it was published and when the twins were two, however, I ran out of words.

Yet, I knew I was going through something so harrowing it could only be the stuff of literature. The far extremes of the human experience presented themselves daily. Rage. Powerlessness. The occasional spike of joy. If only I could write it down. I had intention, nothing more.

Just after the twins turned three, cracks of light appeared. Three and a half -- I was almost there! I started a private Tumblr and resolved on New Year’s to write exactly 100 words a day, about anything. I shared the link with no one.

You can catch Val’s craft discussion, “It’s HOW You Say It: Exploring Voice in Fiction” on Saturday, April 6th at 3:00pm at the Muse. For all the latest Muse news, follow #Muse19.

Val Wang is an author and filmmaker interested in the intersection between the personal and the global. She is the author of the memoir Beijing Bastard as well as the director of the documentary The Flip Side, which won Best Documentary Short at the 2018 DisOrient Asian American Film Festival of Oregon. Her other writing has appearing in The Common, Elle, The Toast and her multimedia work has been broadcast on PBS, WGBH, and WBUR, among other venues. She is an Assistant Professor in in the English and Media Studies Department of Bentley University. She lives in Cambridge with her husband and twin children but her heart is still partly in Beijing. 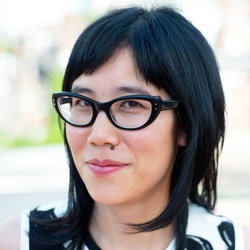