The Muse and the Marketplace 2019 kicks off on April 5th at the Park Plaza Hotel in Boston. This year’s theme is writing in a time of upheaval — whether such upheaval is personal, political, artistic, or all of the above. In anticipation of the conference, we’ve asked Muse 2019 presenting authors to describe a time when it was impossible for them to write, but they wrote anyway. How did they do it? What did they write? Our next presenter in the series is Kelly J. Ford author of Cottonmouths.

After completing GrubStreet’s Novel Incubator program, I had a hard time getting down to work with my novel. I put far too much pressure on myself to publish as soon as possible and engaged in useless comparisons with my cohort when I didn't.

Amid this, my closest friend in the Novel Incubator, Jennie Wood, writer/creator of the award-winningFlutter graphic novel series and A Boy Like Me, mentioned creating a graphic novel together. Working on something entirely new -- and in an entirely different medium -- was freeing and helped to get me out of my own way with my stalled novel because I felt zero pressure to publish. I removed the marketplace from my mind and rediscovered the unfiltered creative freedom and fun of the process when it's unhitched from a dream or a deadline. It's also much easier to let go of stories that don't work when you get in the habit of writing for something other than publication. I applied a lot of what I’d learned from Jennie and that experience to my novel and finally managed to do the dang thing -- query and eventually publish my debut novel, Cottonmouths.

You can catch Kelly’s craft discussion, “She's Terrible, and I Love Her: On "Unlikable" Female Characters” on Sunday, April 7th at 10:00am at the Muse. For all the latest Muse news, follow #Muse19.

Kelly J. Ford is the author of Cottonmouths, named one of 2017’s best books of the year by the Los Angeles Review. Her work has appeared in Black Heart Magazine, Fried Chicken and Coffee, and Knee-Jerk Magazine, and is forthcoming in Post Road Magazine. Kelly is an instructor for GrubStreet Writing Center and an IT project manager. She also appears on Grepcast, a weekly podcast covering technology and technology adjacent topics from TSP LLC. Kelly is Arkansas bred and Boston based. 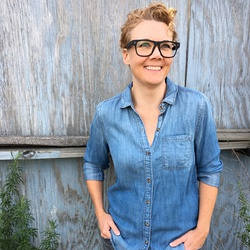