About
News on the (Seaport) Move

In anticipation of our move later this year, GrubStreet’s Founder and Executive Director Eve Bridburg shares an exciting update about GrubStreet’s new look and feel, including our new logo and color.

I’m very excited to share a sneak peek of GrubStreet’s new logo before we officially launch it later this month. In designing our new creative writing center, we knew we’d need an updated look and feel to match this exciting next chapter.

To lead us through the many decisions ahead, we hired the fearless branding firm Catapult. With their help and through a process led by GrubStreet’s amazing Senior Communications Manager Sean Van Deuren, we’ve landed on a new logo and color we’re excited to share with you.

The more we see this logo, the more we love its artistic feel and how each letter is a different size to represent different perspectives, which is what we’re all about here at Grub. It also reflects what this growing community values: being real, supportive, engaging, and artistic.

Of course, you might notice the other big change: switching GrubStreet’s primary color from red to yellow. Yellow is a bold choice and one that will play well with the broad range of sub colors in our new space in the Seaport. We can’t wait to show you a few renderings of our new center in the next few months so you can see exactly how beautiful it looks. Until then, here are a few examples of how our new logo will live in the world.

coffee or wine. What could be better for writers?)

(Ok, Michelle Obama is not actually scheduled to speak at GrubStreet any time soon . . . but

a creative writing center can dream, right? In the meantime, check out our new events flyer.)

(We’re giving you two sneak peeks for one! Check out the new Muse and the Marketplace

logo coming to a writing conference near you in April 2020.)

In the coming months, we’ll be sharing even more GrubStreet swag with you. We’ll have everything from pint glasses to enamel pins, and more. In the meantime, we hope you love this new design direction as much as we do. And don’t worry, we’re not changing everything. For instance, we’ll still have red couches in the new space. The only difference is that they’ll be larger to fit even more Grubbies. 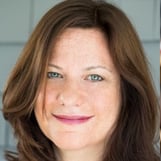 Under Eve’s (she/her/hers) leadership, GrubStreet has grown into a national literary powerhouse known for artistic excellence, working to democratize the publishing pipeline and program innovation. An active partner to the Mayor’s Office of Arts and Culture, Eve was the driving force behind establishing the country’s first Literary Cultural District in downtown Boston and securing chapter 91 space in the Seaport to build a creative writing center. The Barr Foundation recently named her a 2019 Barr Fellow in recognition of her leadership. Having graduated from its inaugural class, Eve remains active with the National Arts Strategies Chief Executive Program, a consortium of 200 of the world’s top cultural leaders, which addresses the critical issues that face the arts and cultural sector worldwide. Eve has presented on the future of publishing, what it takes to build a literary arts center, and the intersection of arts and civics at numerous local and national conferences. Her essays and op-eds on publishing, the role of creative writing centers and the importance of the narrative arts have appeared in The Boston Globe, Huffington Post, Cognoscenti, Writer's Digest and TinHouse. Eve serves on the Advisory Board of The Loop Lab, a new Cambridge-based nonprofit dedicated to increasing representation in the Media Arts. Eve worked as a literary agent at The Zachary Shuster Harmsworth Literary Agency for five happy years where she developed, edited, and sold a wide variety of books to major publishers. Before starting GrubStreet, she attended Boston University’s Writing program on a teaching fellowship, farmed in Oregon, and ran an international bookstore in Prague. 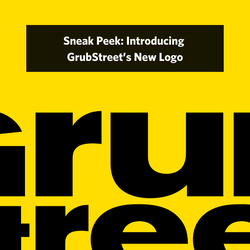