GrubStreet runs on coffee, printer ink, and community. This series features just some of the Grubbies who make our community strong. In this edition, meet Memoir Generator graduate Elsa Williams.

How do you beat a bout of writer's block?

Usually what I am blocked about is how to approach a particular scene. I like to frame vignettes in my head before I start writing, and sometimes I just can't get anywhere that way. So it can be helpful to let myself write something else. Or to revise a different section, because often when I'm revising I find things that need to be rewritten from scratch.

My favorite technique that I learned from Michelle Seaton is making lists. For instance, what are the themes of the project and which scenes fit into each of those themes? Also, writing about how frustrating it is to write. There's always a lot of material there.

What are you working on right now?

I'm working on a memoir about my early twenties, revolving around my boyfriend's death from an overdose when I was twenty-four.

A group of us from the Memoir Generator and the Memoir Intensive have started a workshopping group. We have so much experience with each other's projects that it makes it easier to just jump new work without having to spend a lot of time giving background. And we trust each other to give constructive criticism because we all know that we've been through the GrubStreet training on how to give feedback in a positive way.

I just started a TinyLetter. I think it's going to be a good way to motivate myself to be constantly working on new material.

When I purposely set time aside to write. Getting a babysitter so I can have an uninterrupted block of time on a Saturday. Or when I'm taking a class or meeting with our writing group, a protected block of time in my week.

Worst job you’ve ever had?

An internship in a biomedical lab when I was an undergraduate. The head of the lab was under a huge amount of stress. She was untenured and had a three-year-old daughter, and really needed us to be producing important science all the time. She would pit people against each other and undermine them. It was a really bad combination of micromanaging and lack of support.

Now, as a woman who has dropped off the academic science track, I have a lot of sympathy for her. But, at the time, it was really demoralizing. I took a career aptitude test to see if there was a different career I should switch to, and the result was that I should be a laboratory scientist, so it wasn't particularly useful.

I've just started doing non-Euclidean crochet, which is a really interesting intersection of math, ecology, and crafting. You make these things that look like beautiful coral and are also models of hyperbolic planes and pseudospheres.

What was the most important thing you took away from your intensive program?

The Memoir Generator was an opportunity to get feedback on my project specifically as a book-length project. In class, Michelle talked about right structure as the one that is able your story, and that's something I think about a lot.

We talked about craft and structure during the first and last phases of the class, and there were two one-on-one meetings with Michelle to really dig into what the scope of the project was going to be. It helped me to trim down my project, to really home in on what the story is.

Also, I wrote a lot. I'm not sure exactly where all that new writing is going, but I've got everything in Scrivener, so I have a reservoir of writing to rework into new scenes and new chapters.

Want to find out more about all the other amazing people who make the GrubStreet community what it is? Check them all out here! And while you're at it, see what classes are on offer at Grub this fall. 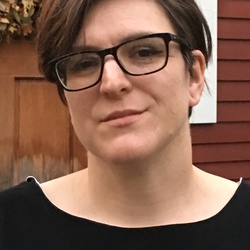