Dept. of Congrats: May 2022 Community Successes

Every month, we celebrate successes of all stripes! In May, Grubbies were published in literary journals across the country, won awards and prizes, published books, and so much more. Our community closed May 2022 out with 52 publications, 10 fellowships, eight awards and prizes, and five book publications! Let us celebrate you: submit your good news to GrubStreet’s Department of Congratulations. 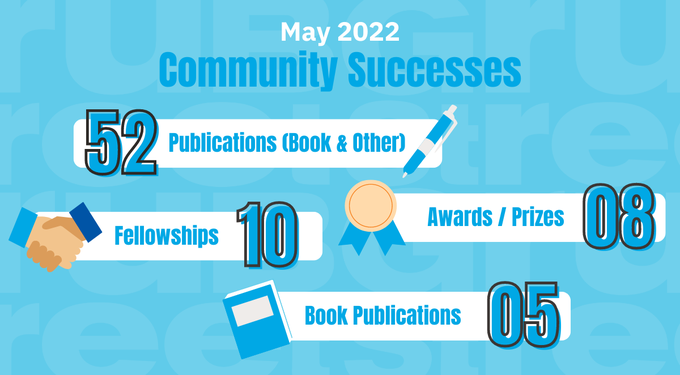 Jeffrey Feingold has been appointed to The Wise Owl Literary Magazine’s permanent panel of podcast narrators. His creative nonfiction essay “Eight Ways to Die Hard,” about the perils of adopting in Russia, was published by Intrepid Traveler. His piece “The LTD” was published by Book of Matches Literary Journal. His story “Dumpster of Broken Dreams,” about the absurdity of the acting business, was published by confetti literary magazine. His micro-creative nonfiction essay, “Little Rabbit,” about addiction was published by A Too Powerful Word. Rachel Pruchno’s book Beyond Madness: The Pain and Possibilities of Serious Mental Illness was released in April by Johns Hopkins University Press. This book shows what individuals, families, and communities can do to help people with illnesses including schizophrenia, bipolar disorder, and depression.

Julie Brill’s recent piece in Haaretz was selected by Memoir Monday. Julia Juster’s essay "Says the Rat" was published in Hare's Paw Literary Journal. She thanks all the paws that passed over it before publication, especially the Essay Incubator and former fellow workshopper Kira Witkin. Novel Incubator Graduate Aube Rey Lescure's essay for Guernica, "At the Bend of the Road," was selected for Best American Essays 2022 by Alexander Chee. Ashley Connors Stehn’s short story “Unreachable Destination Amid Undeniable Love” was published in Hare’s Paw Literary Journal. She thanks Yu-Mei Balasingamchow for the inspiring prompts in the “6 Weeks, 6 Stories” class and everyone in the class for their feedback.

Instructor and Novel Incubator Graduate Milo Todd's short story "Detached" was published in the final issue of SLICE Magazine. While he's sad to see the magazine go, he's honored that his "satirical odyssey" of a trans narrator was included in their farewell. Suzanne Ketchum Adams's personal essay "Summer's End" was published in bioStories. She thanks Kate Racculia, her instructor in Novel Revision, for encouragement and feedback. Author and journalist Maria A. Karamitsos will induct the Late Acclaimed Author Harry Mark Petrakis into the Chicago Literary Hall of Fame on May 19th.

Boston Writers of Color Member and Memoir Incubator Graduate Lorena Hernández Leonard’s essay “The Witching Hour” was published in Corporeal Khôra. She thanks her Incubator and Generator friends who helped shape the piece. Judy Lipson’s memoir Celebration of Sisters: It Is Never Too Late To Grieve was released. Instructor Kayla Degala-Paraíso’s prose poem “A shortlist of cheeses and wines I would take home for free when I worked in the Specialty Department at Whole Foods” was published in Okay Donkey Magazine. Instructor Yu-Mei Balasingamchow's story “A Reliable Woman” was published in the fiftieth-anniversary edition of the Mississippi Review. It was also a finalist in the Sewanee Review’s 2021 Fiction Contest.

Judy Galliher’s essay “LEAVING YOUR COMFORT ZONE: Putting fun on the calendar” was published in The Mindful Word. She thanks Ethan Gilsdorf and her classmates in the fall 2021 "Writing the Short, Publishable Personal Essay" class. Novel Incubator Graduate Kasey LeBlanc’s debut novel, Flyboy, was purchased by HarperCollins / Balzer + Bray. He workshopped early pages of this novel in Katie Bayerl's 2018 “YA Novel in Progress” class and refined it with much help from his classmates and instructor Michelle Hoover in the 2019-2020 Novel Incubator class as an Alice Hoffman fellow. Instructor Carolyn Zaikowski's poem "Debt" was published in the spring issue of Sixth Finch.

Russell Dupont has written three novels and had his poetry published in numerous journals since participating in the Memoir Project, a collaboration between GrubStreet and the City of Boston. His poems “Rocks & Stones,” “Journal, Barton, VT,” and “With John Martin on the Mattawamkeag” were published in Vol. 42 of the Northern New England Review. Boston Writers of Color Member and Emerging Writer Fellow Tochukwu Okafor has been named a 2022 UCross Foundation Fellow. He has also been awarded a 2022 artist residency by the Kimmel Harding Nelson Center for the Arts. He thanks Dariel Suarez, his mentor, for his support. Deb Fenwick's flash creative nonfiction essay "Screwdriver" was published in Hippocampus Magazine. She is especially grateful for the guidance of instructors Dorian Fox and Katie Bannon.

Boston Writers of Color Member J L Higgs’ short story “Jesse” was published in Coneflower Cafe. His story “Fences” was published in Potato Soup Journal, and his story “Skeleton Day” was published in The Bookends Review. Nikki Lopes' story “The Birthday Party” received an Honorable Mention in the Women on Writing Winter 2022 Flash Fiction Contest. Deborah Leipziger's poem "Lobo" was published in an anthology of contemporary poets called Tree Lines from Grayson Books. She thanks her instructor Carolyn Zaikowski and the wonderful poets in her class during the pandemic. Jacqueline Fein-Zachary's debut novel, Harvest Dreams, will be released in April 2023 by Bold Strokes Books. Jackie credits GrubStreet for the encouragement of her classmates and great instruction by her teachers and for surviving (oops, learning from) all the professional critiques at several Muse and the Marketplace conferences.

Betty Reed's piece "If Bach Could Have Zoomed" was published in The Haven. She thanks Ethan Gilsdorf and Cat Parnell for inspiration and edits. Donna Gordon’s debut novel, What Ben Franklin Would Have Told Me, will be released from Regal House on June 8th. Her launch will take place at Harvard Book Store. Boston Writers of Color Member and Instructor Kim Coleman Foote's story "Man of the House," published in Ecotone, was selected for The Best American Short Stories 2022 by Andrew Sean Greer. Instructor Derek JG Williams' poem "Marginalia" was published in Issue 8.2 of The Bear Review. Memoir Incubator Graduate Caroline Stowell’s review of Emily Maloney’s Cost of Living, “The Cost of Healthcare: Will We Be Okay?,” was published in Pangyrus. She thanks Anri Wheeler for her probing editorial questions and Alysia Abbott for bringing this book to her attention in the first place.

Instructor and Novel Incubator Graduate Milo Todd's short story "Estranged" was published in Response Magazine. Memoir Incubator Graduate Linda Button’s piece “In Praise of One Beat Words” was published in Brevity Blog. She thanks her family of Memoir Incubator grads. Pete Prokesch's short story "Through the Glass" was published in BlazeVOX Journal. Kevin McIntosh's novel Class Dismissed won the Next Generation Indie Book Award for First Novel (70-90K words). He is eternally indebted to Lisa Borders' “Novel-in-Progress” class for jumpstarting his book. Kitty Beer’s book Marriages and Other Dilemmas: Collected Stories and a Memoir was released in May from Plain View Press.

Kimberly Crow's flash fiction piece "Abracadabra and Other Wishful Thinking," a story about the loss of identity experienced by mothers with young children, was published in Every Day Fiction. Kelly Rice Schmitt's debut picture book I, Ship will be published by Lerner Books in Fall 2023 with Jam Dong illustrating. Narrated by a container ship, this story takes readers on a journey across the seas while introducing key concepts in international shipping and trade. She thanks Elaine Dimopoulos and Holly Thompson for their foundational classes on writing for children. Instructor Alysia Abbott’s essay “I'm Longing to Be the Mother I Never Had” was published in Cognoscenti. The essay began in Samantha Shanley's “Writing Motherhood” class. She'd also like to thank Dorian Fox and Lisa Levy for their helpful feedback.

Alison Goldberg's picture book Bottle Tops: The Art of El Anatsui, illustrated by Elizabeth Zunon, will be released from Lee & Low Books this month. Paige Curtis’s op-ed “Public banks can help make real climate progress. Why is there only one in the U.S.?” was published in Grist. Instructor Binx R Perino’s poem "Our Globe, A Woman Scorned" was published in Variant Literature's Spring 2022 issue. Jeffrey Feingold’s creative nonfiction essay “I Walk the Line” will be published in The Wise Owl Literary Magazine in July. Novel Incubator Graduate Pam Loring’s Salty Quill Writers' Retreat for Women is offering a full scholarship for its fall session, September 24th to October 1st.

Katherine Tunning's story “Ohio Pearl” was published in The Penn Review. Elizabeth Christopher's flash story "Tender" was published in The Penmen Review. She thanks instructor Tim Horvath and his “6 Weeks, 6 Stories” class for getting her started and encouraging her to stick with it. Cathy Wang is grateful to be awarded a scholarship to attend Bread Loaf 2022. She couldn't have done it without instructor Colwill Brown and her life-changing classes. Memoir Incubator Graduate Jason Prokowiew received a Contributor Award in Nonfiction for the 2022 Bread Loaf Writers’ Conference. He thanks Memoir Incubator guest speaker Jonathan Escoffery for his guidance and his Grub instructors Alysia Abbott and Xujun Eberlein.

Joseph Hughes's memoir The Smuggler's Apprentice was a Category Winner in the 2022 Memoir Magazine Book Prize. He owes a huge debt of gratitude to various Grub instructors who shared their wisdom on memory writing. Alvilda Sophia Anaya-Alegría was selected as one of ten artists to display an installation in the newly renovated Pynchon Plaza in Springfield, MA. This Saturday, June 4th at 2pm ET, the community will come together to celebrate the art, meet the artists, and enjoy performances and activities. 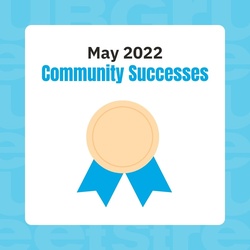