In Emiko Jean’s Tokyo Ever After—a Reese Witherspoon Book Club Pick and New York Times bestseller—main character Izumi Tanaka is a high school teen turned Japanese royalty overnight. After learning her father is the Crown Prince of Japan, she’s dropped into a strange, new world of politics and protocols, royal heritage, and self-discovery. Oh, and she meets a handsome bodyguard, too. Between not feeling Japanese enough in America and feeling too American in Japan, her journey to happily ever after isn’t as smooth as she hoped.

Now, in Emiko’s sequel, Tokyo Dreaming (Flatiron Books, 2022), Izumi’s happily ever after seems even farther away than ever, with the impending stress of college, the Imperial Household Council’s disapproval of her parents’ engagement, and trouble in paradise with her boyfriend—whom she might have to let go for the sake of her parents’ happiness. It’s an owned-voices story Disney has yet to represent—a strong, determined Princess of Japan who will do anything for the happily ever after of herself, and the family she cares so deeply about. Tokyo Ever After and Tokyo Dreaming are refreshing, fun reads for any YA reader who loves a little romance and royalty in their lives.

Hadley Timmermann: Tokyo Dreaming is a sequel. Did you know while writing Tokyo Ever After that, you wanted the story to continue past the first book? Or was the second novel an afterthought?

Emiko Jean: I always knew the story would continue past the first book. One of the first things I had to decide was where to pick up the story—right after the events of Tokyo Ever After or a few years down the road? Ultimately, I settled on continuing Izumi’s journey in the immediate future. Next, and the most difficult part, was figuring out how to create a similar story but different from Tokyo Ever After. One of the strategies I used was introducing a new character. Without spoilers, I will say that it was so much fun revisiting old characters and seeing this new character shake up their lives.

Izumi dubs her malicious royal cousins the “Shining Twins” in the first book. In the second, the twins have a redemption arc. Had you always planned for Izumi’s cousins to be good at heart? Why do you think their arc was important for the story?

I really wanted to redeem the twins in this story. I love writing about strong female friendships and thought the twins would make great supportive additions to Izumi’s princess life.

Voice is very important in YA. What aspects of Izumi’s voice felt most instrumental in writing her character?

Humor and heart. I wanted Izumi’s speech, the way she thinks and characterizes the world, to stem from her relatively sunny disposition.

Both of your novels center around the fact that Izumi is quite literally a princess. What made you want to engage with this theme of a commoner turned Japanese princess?

The commoner-turned-princess is such a captivating story and a very popular trope. Growing up, I’d never read any AAPI princess stories. They simply didn’t exist, and I wanted them to, which is what drove me to write this story about a Japanese American girl who learns she’s literally a princess!

Every author has received advice that changed their writing life. Was there a certain influence or piece of advice you found particularly helpful when you were starting out that you could share with a young writer like me?

As trite as it sounds: Don’t give up. The publishing road is paved with rejection, but rejection is not failure. It’s important to remember that.

Tokyo Dreaming and Tokyo Ever After are available at Bookshop.org.

Emiko Jean is the author of Tokyo Dreaming, Tokyo Ever After, Empress of all Seasons, and We’ll Never be Apart. When Emiko is not writing, she’s reading. Most of her friends are imaginary. Before she became a writer, she was an entomologist (fancy name for bug catcher), a candle maker, a florist, and most recently a teacher. She lives in Washington with her husband and children (unruly twins). 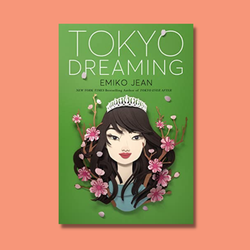