Every month, we celebrate successes of all stripes! In September, Grubbies were published in literary journals across the country, won awards and prizes, published books, and so much more. Our community closed September 2022 out with 39 publications, five book publications, five awards and prizes, and three book deals! Let us celebrate you: submit your good news to GrubStreet’s Department of Congratulations. 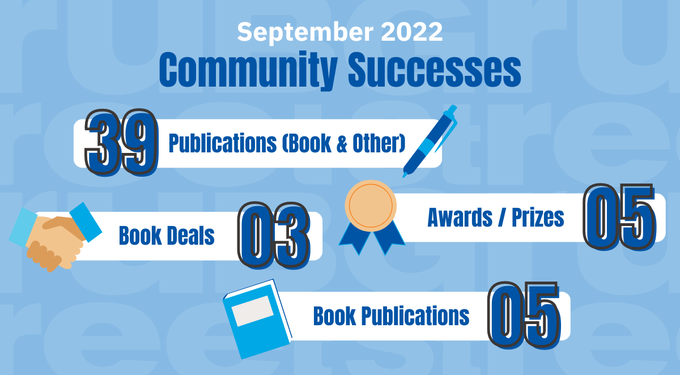 Instructor Lisa Braxton’s essay “A Blip in Your Life: A Boston Breast Cancer Survivor Story” was published in the "Think Pink" section of the October issue of Boston Magazine. Boston Writers of Color Member Paige Curtis’ piece “Three Ecological Lessons From Toni Morrison” was published in Sierra Magazine. Brenden Layte's flash nonfiction piece "Exhausted" was published in Lost Balloon. Jason Colpitts’ middle grade book Corrine and the Underground Province was published in April 2022 and was awarded a 2022 Silver Mom’s Choice Award. He attended dozens of Muse & the Marketplace seminars and was enrolled in both the Manuscript Review with Beth Raisner Glass and the Manuscript Mart with literary agent Regina Brooks. He also wishes to shout a mighty thank you to all the GrubStreet staff!

Marianne Cotugno’s creative nonfiction piece "No More Turtles" was published in Griffel. She is grateful for the many GrubStreet classes and teachers who have helped her, especially Theresa Okokon. Hassan Muhammad, who writes as NmaHassan Muhammad, has been long-listed for the Wakini Kuria Prize for Children's Literature for his picture book manuscript, Hamood's Wish Tree. He dedicates this feat to his late son Abdullateef Hamood who inspired the story. He is grateful to Holly Thompson and the “Picture Book Revision” class for the strength of the manuscript and their love. Instructor Mary Carroll Moore’s flash story “Divine Intervention,” inspired by an urban legend told to her by a Ukrainian friend, was published in Fictive Dream.

Ellen Meeropol is delighted to welcome her fifth novel, The Lost Women of Azalea Court, to the world. Advanced Essay Workshop Graduate Iris (Yi Youn) Kim's poem “jjimjilbang-bathhouse” was published in Nonwhite and Woman: 131 Micro Essays on Being in the World (Woodhall Press). Taylor Sprague’s essay “In Defense of Trans Childhood” was published in Pangyrus. This is their first publication! They thank GrubStreet for creating a community of inspiration and encouragement that has allowed them to get to this place as a writer. Nikki Ummel's debut chapbook, Hush, will be published in October by Belle Point Press. Pre-orders are live.

Grace Toscano's poem was published in Clepsydra Lit. Essay Incubator Graduate Brandy E. Wyant's essay "I'm a Therapist Working With Clients Who Self-Harm. Then I Started Cutting Myself." was published in HuffPost Personal. She would like to thank her colleagues in the 2021-22 Essay Incubator, especially instructor Ethan Gilsdorf, for their generous feedback on the draft and all their support. Kathryn Silver-Hajo's novel Roots of The Banyan Tree recently received an offer of publication. The novel, originally titled Four Swirls of Ink, got its start in Matthew Salesses' “Writing the Novella” workshop at GrubStreet, and it grew from there. It was also workshopped in Adam Stumacher's “Master Class in Revision and Submission.”

Viktoria Shulevich's humor piece "We're Your Favorite Band from High School and This Is Our Final Goodbye Tour" was published in McSweeney's Internet Tendency. Frances McNamara’s novel Death in a Time of Spanish Flu, Book 9 of the Emily Cabot Mysteries, will be published on October 20th. It received a starred review in Publisher's Weekly. Instructor Catherine Parnell's short story "Vin du Pays" was published in Emerge. Yvonne Liu’s essay “After being diagnosed with cyclothymia at age 30, I kept my struggles a secret. I was raised to portray the image of a successful immigrant.” was published on Insider.com. She was featured on the New York Times’ Modern Love podcast this summer based on her 98-word “Tiny Love Stories” piece.

Memoir Incubator Graduate Dr. Tamara MC’s editorialized interview “What Adiba Nelson taught me about self-love” was published in Motherly. She thanks her Memoir Incubator colleagues for their continued and loving support—Julie Brill, Robert Laubacher, and Patty Mulcahy. Short Story Incubator Graduate Ann Russell's short story "Now that I Can Dance" was published in Catamaran. She thanks Ron MacLean for his help and insight in revising this story in the 2020-2021 Short Story Incubator. Jenn Bouchard is thrilled to share that her second novel, Palms on the Cape, will be published in 2023 by TouchPoint Press.

Diane Forman's essay "What I Learned About Longevity From Centenarians in the Blue Zones" was published in AARP’s The Ethel. Boston Writers of Color Member and Instructor Angie Chatman's essay "Writing as Apprenticeship" will be published in Brevity on October 10th. Instructor Carolyn Roy-Bornstein’s essay “Love’s Drowning” was published in The Maine Review. She thanks Ethan Gilsdorf for his kind words of wisdom about the piece. An excerpt from instructor Olivia Kate Cerrone's novel-in-progress, Displaced, was published in Nixes Mate Review. Marilyn Bellemore's article on Acadian cooking in the Canadian Maritimes was just published in Llewellyn's 2023 Herbal Almanac.

Instructor Kayla Degala-Paraíso's experimental memoir piece "A History of Skin" was published in Anomaly. Margaret Balch-Gonzalez’s short story “Vern Fronk Returns to Our Neighborhood” was published in DreamForge Anvil. She thanks the many GrubStreet and Muse faculty from whose insights and encouragement she has benefited, especially Annie Hartnett, Lisa Borders, K Chess, and Lynne Barrett. Memoir Incubator Graduate Tamara MC’s “‘Uncultured’: The Intergenerational Trauma of Girls Growing up in Cults” was published in her dream publication, Ms. Magazine, founded by her hero, Gloria Steinem. Her review “Embracing Challenges: A Review of Ain’t That a Mother: Postpartum, Palsy, and Everything in Between” was published in Literary Mama. Her author interview “What Adiba Nelson taught me about self-love” was published in Motherly. If you have a book coming out, she'd love to interview you, too.

Boston Writers of Color Member Ava M. Fields will present an asynchronous project as part of the Whole Damn Swarm: A 30th anniversary conference exploring the legacy of Candyman, taking place from October 7th to 9th. Her project is called “Apt Horror Presents: From Rumor to Flesh: How Candyman treats Tragedy in Villainy” and will be available throughout the conference. Her project titled “All While You Sleep: Jordan Peele, Black Bodies, and Gift Wrapping the Black American Nightmare” was awarded first place in the 2022 Obsidian WROTE and Black Writers Workspace Black Creators Collaborative Writing Competition. Memoir Incubator Graduate Karen Kirsten's memoir Irena’s Gift about a family torn apart by war was acquired by Penguin Random House Australia at auction. She thanks the amazing Alysia Abbott and her fellow memoir incubees for helping finish the 10-year project and for their unflagging support.

Sarah Tracy Burrows’s book Yours Affectionately, Osgood: Colonel Osgood Vose Tracy’s Letters Home from the Civil War, 1862-1865 was published by Kent State University Press in June 2022. It tells the story of her great-great grandfather, Osgood Vose Tracy, an abolitionist Civil War soldier and prisoner of war. Jeffrey Feingold’s short story “Rich Girl” has been shortlisted for the 2022 Short Story Prize by Superlative Literary Journal. Essay Incubator instructor Ethan Gilsdorf’s essay "NASA crashed into an asteroid! Nerds like me are in heaven" was published in WBUR's Cognoscenti. Ethan would like to thank his students for inspiring him to "get off his butt, write, and submit."

Ana Hebra Flaster’s essay “How I became the matriarch of my Cuban family in New England” was published in WBUR’s Cognoscenti. She’s grateful to fellow Cuban Americana Judy Bolton-Fasman for helping her find a home for the piece. Boston Writers of Color Member Mee Ok Icaro's poem "Triptych" was published in the Massachusetts Review along with an interview, "10 Questions for Mee Ok Icaro." Sarahbeth Persiani’s book Run, Walk, Crawl: A Caregiver Caught Between Generations won the NYC Big Book Award for Women’s Issues. She’s grateful for the inspiration from the GrubStreet community. Jeffrey Feingold’s short story “The Loneliest Number” was published by After Dinner Conversations. His creative nonfiction essay “Goth Girl” will be published in the Schuylkill Valley Journal.

Robin McLean's second short fiction collection, Get ’em Young, Treat ’em Tough, Tell ’em Nothing, will be released from And Other Stories on October 18th. The book was a Most Anticipated Book for Fall 2022 in both The Millions and Lithub. Publishers Weekly says of the stories, "With merciless prose and a bold vision, McLean continues to impress," and the book just made the The Big Issue's Fall Must Reads list: "These imaginative, poetic stories overflow with compassion and should seal McLean’s flourishing reputation as a writer of great heft." Boston Writers of Color Member JL Higgs' short story "A Grim Fairytale" was published by Nzuri Journal. His short story "Freak Show" was published in the Fiery Scribe Review. 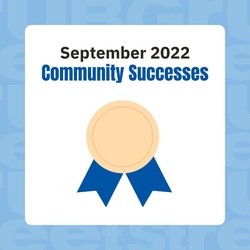