Every month, we celebrate successes of all stripes! In April, Grubbies were published in literary journals across the country, won awards and prizes, published books, and so much more. Our community closed April 2022 out with 38 publications, five book publications, three awards and prizes, and one book deal! Let us celebrate you: submit your good news to GrubStreet’s Department of Congratulations.

Julia Grant’s essay "The Blessing of the State" was published in The Southeast Review. She is extremely grateful for the outstanding guidance and support of instructors Dorian Fox and Xujun Eberlein. Jason Prokowiew's essay about Florida's "Parental Rights in Education Law," “Florida is outlawing the one thing that helped gay kids like me” was published on Cognoscenti. He thanks his Memoir Incubator family, particularly Scott Campbell and Linda Button, for prompting and supporting this piece. Instructor Dorian Fox's flash essay "In Too Deep" was published in Booth. He's grateful to Caitlin McGill, Xujun Eberlein, Paul Haney, and Matt King for their crackerjack feedback and Ethan Gilsdorf for his support.

Essay Incubator Graduate Vanessa Garza's essay "Cerebral Firestorms" was published in Notre Dame Magazine. She thanks her Essay Incubator classmates and teacher Ethan Gilsdorf for reading many drafts of this piece. The beginning of Kit Carmichael’s debut romance novel, Second Sons, was published in Embark Literary Journal. She thanks Milo Todd for his useful workshop, "Writing Outside of Your Lane." Instructor Courtney Sender’s article "The Uncanny Prescience of 'Servant of the People'" — an arts & culture piece about Volodymyr Zelensky's sitcom in which he played a fictional Ukrainian president before he became the real one — was published in The Atlantic. Instructor Catherine Parnell's flash fiction piece "The Magus" was published in Orca Literary Journal.

Memoir Incubator Graduate Linda Button’s memoir excerpt “Something Bit Him” was published in Dorothy Parker’s Ashes. She thanks instructors Alden Jones, Michelle Seaton, and, most recently, Alysia Abbott and the remarkable tribe from the Memoir Incubator. Patricia Harney’s essay "What critics of 'prolonged grief disorder' are missing" was published in Slate. She thanks Alysia Abbott and her awesome Memoir Incubator classmates, her "Small but Mighties" writing group members (Patty Mulchay, Sylvia Baedorf Kassis, Leah Soumerai, Caroline Stowell), and fearless instructor Dorian Fox for all of their inspiration and encouragement. Instructor Meta Wagner has launched a free Substack newsletter for writers called Page Fright.

Amy Glynn's personal essay “Plans” was published in Pangyrus. She thanks GrubStreet instructors Kate Senecal and Lori Goldstein for their support and encouragement. B. B. Garin's short story “The Teaseller,” set in the same world as her novel, was published in Penumbric Speculative Fiction Magazine. Both the story and the novel were developed over several GrubStreet classes, for which she is extremely grateful. Short Story Incubator Graduate Katie Edkins Milligan's short story "Lucky's" was published in the latest issue of Fiction magazine and is available to read online. Essay Incubator Graduate Sarah Grimes’ piece “Opening” was published in Split Lip Magazine. She thanks instructor Ethan Gilsdorf and her wonderful classmates for their help with this piece.

Cathy Wang's short story "ESL" will be published in Huizache. She writes under the pen name Cathy Lue-W, and she thanks instructor Colwill Brown for her guidance on plot and sentences that sing. Russell Dupont has written three novels and four chapbooks since participating in the Memoir Project, a collaboration between GrubStreet and the City of Boston. His latest novel, Movin' On, is now available for purchase. Alexandra Grabbe’s essay “The Singular Joy of Sharing a Garden” was published in Snapdragon Journal. She thanks fellow Grubbie Carolyn Roy-Bornstein, who alerted her to this opportunity. Instructor Kayla Degala-Paraíso's experimental prose piece "My Girlfriend Attempts To Reincarnate Her Aunt, Barely Two Weeks After She Died" was published in [PANK] Magazine. She thanks Marcella Haddad and the “6 Weeks, 6 Stories” class for their thoughtful feedback.

B. B. Garin's short story "Retrograde" is the featured fiction piece in the April issue of Palooka. Hillary S. Webb's anthropological memoir, The Friendliest Place in the Universe: Love, Laughter, and Stand-Up Comedy in Berlin, was published by University Professors Press. An excerpt from Theresa Prokowiew's memoir The Little Copper Key was published in Impspired and will appear in their print edition at the end of May. She thanks E.B. Bartels and Nicole E. Miller for their unwavering support, honesty, dedication, and encouragement. ​​Caroline’s Stowell’s essay “On Not Leaving My Writing at the Door” was published on the Brevity Blog. She thanks her amazing writing group members Sylvia Baedorf Kassis, Pat Harney, Patty Mulcahy, and Leah Soumerai for their mighty support.

Joyce Swagerty and her daughter Daina Swagerty are exhibiting Stoneroot Epistle: Collage and Poetry in Conversation at the Arnold Arboretum of Harvard University, May 1 - June 25. This collaboration, inspired by the African diaspora, explores the landscapes and layers of universal journey in visual art and word. Andrea Caswell's poem "Mont Blanc" was published in MicroLit Almanac. She thanks instructor Cat Parnell for excellent prompts and encouragement. Boston Writers of Color Member Mee Ok Icaro's poem "Triptych" will be published in The Massachusetts Review and will appear in the fall issue. Zach Semel's poem "Rehearsing with John Mulaney Thirty Seconds Before I Come Out to My Parents" was published in Drunk Monkeys’ annual pop culture issue. His poem "When i dissociate, all cis-men sound like batman" was published in Contemporary Verse 2's Sick Poetics issue. 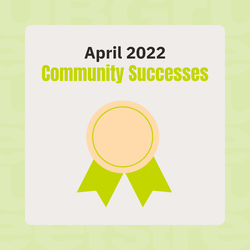