How to Build Your Platform and Land a Book Deal 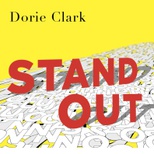 I had always wanted to write a book – and in 2009, I got serious about it. It took me two years to sign a contract and another two for my first book to come out (Reinventing You in 2013), but here’s what I learned in the process about how to build a strong platform and land a (nonfiction) book deal. I’m now on my second book, Stand Out, which was just released in April.