Every month, we celebrate successes of all stripes! In July, Grubbies were published in literary journals across the country, won awards and prizes, published books, and so much more. Our community closed July 2022 out with 30 publications, three book deals, and two book publications! Let us celebrate you: submit your good news to GrubStreet’s Department of Congratulations. 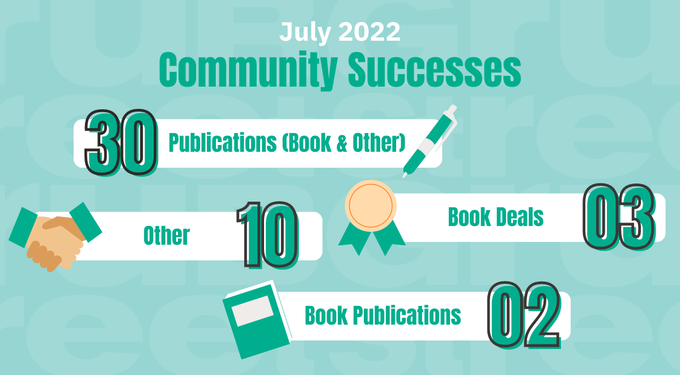 Anri Wheeler's essay "There's Nothing New About Normal" was a finalist in Pangyrus' 2021 nonfiction contest and will appear in their upcoming print edition, "Visions Toward a Less Divided America." She thanks her writing group for their crucial feedback. Kristen Paulson-Nguyen published her first piece in Mom Egg Review, an interview with fellow Grubbie and debut author Neema Avashia. Christine Eskilson's short story "The Last Summer" appears in Summer Bludgeon, an anthology published by Unsettling Reads. Amit Shah's essays "Divining the Past" and "Notes of a summer" were both published in the July issue of Monograph Lit Magazine. He thanks GrubStreet instructor Samantha Shanley for her guidance.

Memoir Incubator alum Polly Ingraham's essay "Finding a Way In" was included in the Summer issue of Ninetenths Quarterly. This issue was devoted to the theme of Marriage, and the piece is an excerpt from her manuscript in progress. Tamara MC published an essay in the Sonora Review, a dream publication she's been submitting to for the past ten years. She owes so much gratitude to GrubStreet and especially instructor Ethan Gilsdorf, who she says is one of the kindest and most generous writing teachers on the planet.

Nicole Zhao's personal essay "Why Are You Stranded?" was published in Roxane Gay's newsletter, ​​The Audacity. She is grateful for the feedback of her classmates and instructor E.B. Bartels in 2020's Advanced Essay Workshop, where she edited this essay. Julie Parker's essay "Ending a pregnancy in the last days of Roe" was published in Salon. She thanks her wonderful writing group, the Roof Writers, and instructors E.B. Bartels and Jennifer Crystal for all their support. Genevieve Sinha’s short story “Memory’s Rule” was published in Hugo-nominated speculative fiction magazine Abyss & Abex.

NmaHassan Muhammad, a children's author and poet, has completed his month-long residency at Ebedi International Writers Residency where he revised three picture books, originally workshopped in Holly Thompson’s picture book revision class. He's confident that two books are now submission-ready and cannot wait to honor his son Hamood with their publication. Ray Anderson’s sci-fi novel Lift will be released next year by Turner Publishing. Anderson says his writing career began at GrubStreet. Of the many classes he took, the fiction courses taught by Lisa Borders and Adam Stumacher were particularly helpful.

Viktoria Shulevich’s humor piece “Hey Jen, Finally Returning That ‘Habits’ Book I Borrowed Four Years Ago!” was published in The Belladonna Comedy. She thanks Jennifer Dupee for her support and inspiration. Instructor Debbie Sosin's essay "Self-Editing Mantras to Enhance Your Revision Process" was published on the Brevity Blog. Amory Rowe Salem’s essay “Title IX didn't fix everything” was published in WBUR's Cognoscenti. She thanks fellow GrubStreet student and author Nancy Rappaport for helping her frame the piece.

Betty Reed’s essay “Questions that Recentered My Writing Joy” was published in Hippocampus Magazine. She thanks Kristen Paulsen Nguyen for the opportunity to publish this essay. Julie Brill's essay “​​My Grandfather’s Memorial Illuminates Holocaust History in Serbia” was published in Balkan Insight. She'd like to thank Tamara MC, Patty Mulcahy, and Rob Laubacher for their help. Memoir Incubator Graduate Linda Katherine Cutting’s essay “My sister has Alzheimer’s. She’s forgetting and teaching me at the same time.” was published in NBC News’ THINK. She would like to thank fellow Memoir Incubator Graduate Ginny DeLuca for her insightful edits.

Len Abram’s review of Matti Friedman's WHO BY FIRE: Leonard Cohen in the Sinai was published in Boston Broadside. Yvonne Liu was featured on the New York Times’ podcast Modern Love. She was interviewed because of her NYT “Tiny Love Stories” adoption piece, “Never Forget Me.” Robert Levine self-published his book State of the Art: Criticism on Contemporary Poetry. Anne Wheelock's personal essay "The Web in My Window" was published in Blueline. Christine Eskilson's short story "A Tale of Two Wives" was published in Guilty Crime Story Magazine. Rob McKean's essay "If I Am Out of My Mind, It's All Right with Me: Lines to Someday Write" was published in The Decadent Review. Rob credits the Muse and the Marketplace for its wonderful inspiration.

Instructor Peter Medeiros’ fiction novella Hydroplaning was published in Giganotosaurus Magazine. Karen Wilfrid signed a book deal with Lily Kessinger at Clarion/HarperCollins for her debut middle-grade novel, Just Lizzie, to be published in Fall 2023. It’s about an eighth grader whose study of asexual reproduction in science class leads her to understand her own asexual identity. Karen thanks instructor Ursula DeYoung and the "Novel in Progress, Continued" writing group that sprung from her 2016 class; Michelle Hoover and the Year 10 Novel Incubator cohort; and her agent Lauren Scovel (Laura Gross Literary Agency), who she met through the Muse conference.

Steven Beeber's book, The Heebie-Jeebies At CBGB’s: A Secret History of Jewish Punk, has been optioned and is being turned into a documentary, currently entitled Rip It Up and Start Again: Jews, The Holocaust, and Punk. Instructor Jennifer Crystal’s guide "How to live with chronic illness" was published in Aeon's Psyche. Stephanie Rose Bird’s book Motherland Herbal will be published in March 2023 by Amistad Books (Harper Collins). She appreciates the plethora of help received at the Muse. The deal was represented by Ericka Phillips and Stephanie Tade of Stephanie Tade Literary Agency.

Neema Avashia's essay collection, Another Appalachia: Coming Up Queer and Indian in a Mountain Place (WVU Press) is a finalist for the Nonfiction New England Book Award from the New England Independent Booksellers Association. Her story was also recently featured on CNN in relation to an episode of W. Kamau Bell's United Shades of America. Memoir Incubator Graduate Karen Kirsten’s essay “Ukrainian refugees want to work” was published in The Jerusalem Post. Susan Phillips' short story "Be a Good Wife" was published by Quail Bell Magazine. She thanks Shelby Kinney-Lang and the great gang from the “6 Weeks, 6 Stories” class for all the inspiration.

Corena Young-Dixon’s poem “A Good Mourning” was published in the Summer 2022 issue of The Plentitudes. Young-Dixon was also selected as one of the Summer 2022 Fellows for the Wild Seeds Retreat for Writers of Color, which is through the Center for Black Literature. Mee Ok Icaro’s essay “Rear Window” was the runner-up for the Prairie Schooner Nonfiction Contest and was published in The Prairie Schooner. Leslie-Ann Murray’s book review “A Place to Call Home in Dele Wed’s Destiny” was published in Ploughshares. Rolando André López Torres’ response to Off Assignment’s Letter to a Stranger  prompt will be published this month.

Kyra Wilson Cook was accepted for Viable Paradise, an annual one-week residential writing workshop in Martha’s Vineyard. Djofa Tavares’ dual language (English/Kriolu) children's book, Tiagu and Vovo, launches next month. Tamara MC’s essay “When Your Apple Watch Breaks You Up With Your Boyfriend” was published in the Sonora Review. Cynthia Yee gave the opening remarks and a reading of her poem, “My MaMa’s Back,” at Revolutionary Spaces for a free screening of the PBS Special: A Tale of Three Chinatowns.

Patrice Gopo’s debut picture book, All the Places We Call Home, was published through WorthyKids. Gopo is also a 2022 Sustainable Arts Foundation Awardee in the category of Children’s Books. Alexis Wright’s essay “The Disney Look” will be published in the Black Lawrence Press’ forthcoming anthology Mamas, Martyrs, and Jezebels: Myths, Legends, and Other Lies You’ve Been Told about Black Women. Avie M. Fields is working on launching Apt, Horror, “a groundbreaking resource that uses pop (counter) culture knowledge as a reputable data source for community development and enhancing community engagement.” Events and more will be announced soon.

Gloria Estela Gonzalez’s novel Arribada was featured in a review on the Midwest Book Review’s website. Marie Myung-Ok Lee completed nine stops on her book tour, including visits in Watertown and Belmont, for her novel The Evening Hero. U-Meleni Mhlaba-Adebo used her social media platforms to showcase her poem, “NO WOMAN NO CRY - a poem for my sisters.” Bettye Kearse had a brief excerpt from her book, The Other Madisons: The Lost History of a President's Black Family, published on Bublish. 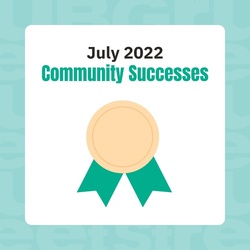