Every month, we celebrate successes of all stripes! This month, Grubbies were published in literary journals across the country, won awards and prizes, secured book deals, and so much more. Our community closed February 2022 out with 37 publications, three awards and prizes, one fellowship, and one book deal! Let us celebrate you: submit your good news to GrubStreet’s Department of Congratulations.

Anne Leiby's micro essay "Flower Salute" was published in a recent edition of River Teeth’s "Beautiful Things" blog. This is a first for Anne, and she thanks her Grub instructors, E.B. Bartels and Shuchi Saraswat, for their inspiration. Essay Incubator instructor Ethan Gilsdorf’s essay "In the '70s, the 'Zoom' kids were my people," celebrating the 50th anniversary of the TV kids program Zoom, was published in WBUR’s Cognoscenti. Boston Writers of Color Member Mee Ok Icaro's essay "The Mother of All Koans" has been accepted by The Georgia Review and will be published this year.

Janet Banks's personal essay "Iowa Through the Windshield" was published in Bluestem Magazine. She thanks instructor Ethan Gilsdorf and her classmates from the "Personal Essay in Progress" class for their encouragement and suggestions for revision. B.B. Garin's flash piece "After the Storm" was published by freeze frame fiction. She started the story after a prompt in a Friday Night Writes Session. Instructor Steven Beeber was awarded a 2022 Somerville Arts Council/Mass Cultural Council Fellowship in Literature in recognition of his novel-in-progress, Minutes.

Memoir Incubator instructor Alysia Abbott’s essay “The $50 I can never spend” was published in WBUR’s Cognoscenti. She would like to thank her writing group for helpful feedback and consistent support. Instructor Yu-Mei Balasingamchow received a grant from the Elizabeth George Foundation to support the writing of her debut novel for one year.

Monica Judge's essay "To Little Red Bathing Cap" appeared in Off Assignment's "Letter to a Stranger" column. She completed the first draft in Theresa Okokon's "Six Weeks, Six Essays" class. Boston Writers of Color Member Jung Hae Chae's essay "At the Bath House" was published in Guernica's specially themed-issue on "Dirt." Her essay "The Gye, the No-Name Hair Salon, the Coup d'Etat, and the Small Dreamers" was published in the latest issue of the New England Review, dedicated to emerging writers.

Instructor Catherine Parnell's latest essay about the silent treatment, "The Silent Bell," was published in Grande Dame Literary Journal. Maryam Keramaty's previously published essay "Me, My Father and the Persian Rug" will appear in Pangyrus’s ninth annual essay collection, Underlying Conditions. She thanks instructor E. B. Bartels and the students in her "Advanced Essay Workshop." Andi Brown’s article "How I Learned About the Beatles in Hebrew School" was published by the Rhode Island Jewish Historical Association. She thanks GrubStreet consultants Lynne Griffin, Michelle Hoover, and Jenna Blum.

Robin McLean's debut novel, Pity the Beast, has been long-listed for the Reading the West Fiction Prize. She thanks GrubStreet's Launch Lab instructors, Lynne Griffin and Katrin Schumann, and all her pals from classes. Kate Hanson Foster's second book of poems, Crow Funeral, will be released by EastOver Press in March 2022. Memoir Generator and Incubator Graduate Marie F. Cahalane’s essay “‘The house they shut off to the world’: Alicia Witt’s tragedy was nearly mine” was published in Cognoscenti.

Jeffrey Feingold's essay about a rather unusual medical journey and associated nightmares, “The Seventh Sense,” will be published by The Wise Owl Magazine. Boston Writers of Color member Mee Ok Icaro's lyrical essay "A Paradoxical Apocalypse: Werner Herzog’s La Soufrière" was published in the tenth issue of the Bennington Review. Boston Writers of Color member Katie M. Veohongs' debut short story, "Kindly, Stop for Me," was published in the February issue of Translunar Travelers Lounge.

Instructor Kira Rockwell is a semi-finalist for the Blue Ink Award with the American Blues Theatre. Her play "oh to be pure again" follows the senior girls’ cabin at Neo-Charismatic Christian church camp. It premieres in 2022/2023 with Actor's Express in Atlanta, GA. Pearson O’Meara’s short story “The LadySmith” was anthologized in To Serve, Protect, and Write: Cops Writing Crime Fiction. Ashley Trebisacci's flash essay "Haircut on the Front Porch" was published in JMWW.

Edwin Hill's novel Watch Her was shortlisted for the Agatha Award for Best Contemporary Novel along with fellow Boston-based authors Hank Phillippi Ryan and Gabriel Valjan. The paperback version of Watch Her is out February 24th. Amy Mevorach’s essay about her experience as a former stripper marrying a future minister, “How Much of My Story Am I Supposed to Share?,” was published in the New York Times “Modern Love” column. She wrote the first draft in Nora Caplan-Bricker's “Short Essay Crash Course.”

Instructor Lisa Braxton’s essay "Soothing a Broken Heart" was published by the online literary magazine You Might Need to Hear This. Casey Brown's short story "Suburban Legend'' will appear in the upcoming issue of Phantom Drift. She thanks instructors Jane Dykema and Alyssa Greene in addition to her GrubStreet classmates, who helped usher this story from the first to the final draft. Instructor Virginia Pye’s fourth book of fiction, The Book Lovers, will be published by Regal House Publishing in October 2023. Angela Thoma's short fiction piece "Catch and Release" was published in Sancho Panza Literary Society's New Square Magazine.

Instructor Peter Medeiros’ story "Light as Air" was published in The Worlds Within. Lesley Bannatyne's debut collection of short stories, Unaccustomed to Grace, will be released from Kallisto Gaia Press on March 8th. The book was a finalist for the Acacia Prize and the Hudson Prize. Her editorial meeting with Steve Woodward from Graywolf at the Muse and the Marketplace 2019 helped her focus the final version. Wendy Yim's novel-in-progress, The Butcher's Apprentice, was longlisted for the Grindstone International Novel Prize. She thanks GrubStreet instructors Jacquelin Cangro, Steve Almond, Tim Weed, Kate Senecal, and Ellen Gandt for helping her get to the third draft and closer to publication. Bernice Lerner's essay "Glyn Hughes: The British Officer Who Liberated Bergen-Belsen" was published in HistoryHit.

Betty Reed’s flash piece “Half-Slip” was published in MicroLit Almanac. Her flash piece “I Am” was published in 50 Words Give or Take. She thanks instructor Cat Parnell. Boston Writers of Color Member Lorena Hernández Leonard's creative nonfiction essay "Salsipuedes: Leave If You Can" was published in Khôra, a dynamic online arts space produced in collaboration with author Lidia Yuknavitch and Corporeal Writing and edited by Leigh Hopkins. Lorena thanks instructor Alysia Abbott and her Memoir Incubator classmates for their valuable feedback in helping shape her work. The release of Novel Incubator Graduate Rachel Barenbaum’s novel Atomic Anna is being celebrated at Brookline Booksmith on April 7th at 7:00pm (EST). 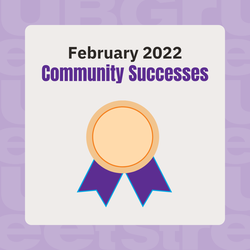