On Breaking the Rules that Taught Us

There's a distinctly rebellious air about the Muse and the Marketplace Conference this year. Come April 6-8 at Boston's Park Plaza, #Muse18 presenters will be letting loose on the writing rules that have held our manuscripts hostage for far too long. To kick off the conversation ahead of the Muse weekend, this year's Muse series explores the writing, publishing, and workshop rules, conventions, and accepted norms that authors, agents, and editors at the Muse love to hate—and why they'd love to see them broken. Some presenters will also offer their own rules or conventions that they want to see adopted in writing and publishing spaces. This installment comes from Cuban/Peruvian writer, artist, educator, and translator Sara Rivera. Sara will be leading the Muse session Fantastic Extremes: The Environments of Speculative Fiction.

There’s an exercise I use sometimes with my poetry students: try ending every poem with a concrete, sensory image.

This (temporary) rule was given to me by a professor in college. At the time, I was fascinated by language play. My poems tended towards symphonic arcs, moving upward, outward, as if they wanted to break the sky open. Sometimes, the poems worked. Other times, they felt lofty and untrue.

So my mentor offered this exercise. I learned that one small detail, one concrete image, can hush the world instead of breaking it open, can anchor the poem to the body.

I became obsessed with the best, most distilled, most striking images. One image that continues to haunt me came at the resonant end of a poem about loss: “Mid-term Break” by Seamus Heaney (1966, Ireland).

Next morning I went up into the room. Snowdrops

And candles soothed the bedside; I saw him

For the first time in six weeks. Paler now,

Wearing a poppy bruise on his left temple,

He lay in the four-foot box as in his cot.

No gaudy scars, the bumper knocked him clear.

A four-foot box, a foot for every year.

This poem states things plainly; hauntingly, it lives in the body. It tells by showing. The right detail at the right time becomes the poem’s key. This was one of my guidepost poems, a poem that I revisited again and again to learn from its craft.

The mentality of image-is-the-key carried me into my MFA program. In that hyper-literary environment, the surprise and specificity of image continued to be a most prized element of craft. For a while, it continued to anchor my work.

Until it didn’t. Until it felt like I was obscuring myself. Frustrated by my increasingly flat, detached writing, I read hard, admiring the (mostly white, mostly male) writers we studied. I used their tools, but nothing worked.

It took signing up for a Contemporary Latin American Literature course (taught in Spanish, outside of my department) for me to read a poem that dropped a lead weight through me. It was another poem about loss, published on a different continent in the same decade. In form, tone, and craft, it broke from the sensory focus of “Mid-term Break.”

In my reading and translation of “En honor de una perdida/In Honor of a Loss” by Alejandra Pizarnik (1963, Argentina), the speaker is shattered. Their inner life has become a knot of silences and broken mirrors. Heaney’s poem uses sensory and documentary language to relay the intimate effects of loss; in language dark and fragmented, Pizarnik relays a different kind of war zone.

I should say of myself that I am impatient for an ending less tragic than silence. [...] I say this with grieving breath: there should exist language that requires silence.

Pizarnik’s poetry spoke to me in the language of my own thought, in the more marginalized of my two languages. Nearly imageless and unmoored from the body, the poem felt unequivocally true.

There are selves we repress and oppress. There are parts of us the world represses and oppresses. The greater the marginalization, the less our inner truths can break through the bars of craft.

That first rule set me on a course I needed to explore. In unlearning it, I changed course, and came out stronger, more sure of myself for it. And so poetry continues to echo life. We can’t be afraid of unlearning. Even helpful rules come from of a set of dominant experiences; they don’t teach everything.

So I challenge my students: try something. Then, try something different. If the poem you’re reading doesn’t hit you and haunt you, read more widely. Allow for the candle and the bedside. Allow for the language that requires silence. Allow for the idea that what we consider “good” craft changes, over time and across cultural boundaries, and your voice can change too.

Sara Daniele Rivera is a Cuban/Peruvian writer, artist, educator, and translator from Albuquerque, New Mexico. Her poetry and speculative fiction have appeared in The Loft Anthology, Origins Journal, DIALOGIST, Storyscape Journal, Circuits & Slippers, The Green Mountains Review, in Boston's City Hall as part of the 2015 and 2017 Mayor's Poetry Program, and elsewhere. She was awarded a 2017 St. Botolph's Emerging Artist Award in Literature. Sara is currently working on a fantasy novel, a book of poetry, and on translating the work of Peruvian poet Blanca Varela. 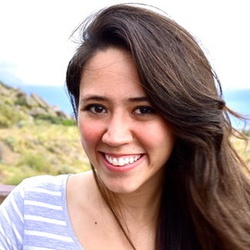 News from the Muse Poetry