Touch the Bear: How to Break Your Own Writing Rules

There's a distinctly rebellious air about the Muse and the Marketplace Conference this year. Come April 6-8 at Boston's Park Plaza, #Muse18 presenters will be letting loose on the writing rules that have held our manuscripts hostage for far too long. To kick off the conversation ahead of the Muse weekend, this year's Muse series explores the writing, publishing, and workshop rules, conventions, and accepted norms that authors, agents, and editors at the Muse love to hate—and why they'd love to see them broken. Some presenters will also offer their own rules or conventions that they want to see adopted in writing and publishing spaces. This installment comes from Blair Hurley, author of The Devoted. Blair will be leading the Muse session A Man Walks into a...: Writing Compelling Scenes in Fiction (full!).

There are these rules for writing short stories. I don’t know who laid them out; somewhere between Chekhov’s gun and Hemingway’s iceberg, rules were being made and were setting like Jell-O. By the time I’d fallen in love with short stories and was starting to write my own, they were cemented, and it seemed important to get the formula right, to faithfully chisel my writing into the stony line of stories gone before. I built a list of rules to make my stories feel mature and sophisticated:

Rule #1: All conflict should be internal.

Rule #2: Allow a small revelation of how the character sees the world.

Rule #3: Too much action makes the story not literary.

Rule #4: By the end, not much should have changed.

It seemed like the stories in Serious Magazines were quiet and subdued; they reined the story’s scope and perception into tightly circumscribed arcs. Stories in Serious Magazines were about vaguely unhappy people saying vaguely unhappy things and then walking away into their unchanged lives. I wrote many faithful style imitations, trying to do what I thought serious stories did.

My fiction was pleasant enough, my sentences carefully assembled. I was building a brick house, solid and correct and up to code. But it was like I was building a house with no one living inside.

The thing I kept missing in my favorite short stories was how their greatness lay in the ways the writers broke the rules.

But the stories I loved thrilled with their daring, their bursts of insight, their slow burns and startling blooms of beauty, sadness, and wonder. Flannery O’Connor said that she didn’t know her traveling salesman character would steal a woman’s artificial leg until the moment he did it. She just held on for the ride and let the story take her where it would, to places of danger and delight.

Somewhere along the line, I got bored with the timid stories I was trying to write.

There was a new story I was working on about a man at a writing retreat, struggling with his love life and with his bitter relationship with his mother. In my first draft, the man has an unpleasant interaction with a lover, has a small revelation about himself, and goes for a walk in the woods. He sees a mother bear crossing the road. And he watches her, sadly, from a distance.

Then I got a wild idea. What if instead of walking away—he tried to touch the bear?

It was as though I’d cracked the story wide open and let what was truly at stake in. It would push the story into a dangerous, uncomfortable place, where the abstract ideas and emotions I’d been exploring would come suddenly to the fore. In a few sentences, my character reaches for the mother bear, putting himself between her and her cub. We hear the startled huff of the bear’s breath, feel the threat of her, and know as the story ends that the character is courting disaster. Suddenly, the implied violence of the character’s relationship with his mother became real on the page. An earlier scene, when the character tells his mother he is gay, and she raises a golf club and threatens him with it (she’s an excellent player), no longer seemed random or melodramatic: this re-enactment of violence, or the promise of it, made the story matter.

For each story since then, I’ve tried to follow what I called my “touch the bear” rule. It’s a rule that reminds me to break the rules I’ve built up in my head, the ones that encourage tepid style imitations instead of real, suspenseful storytelling. It doesn’t always mean that physical violence or hugely dramatic actions have to happen, but it does mean that the risky consequences of characters’ choices need to be explored. Stories matter when they push the boundaries of what is acceptable and polite; they break their own rules and enter new, uncharted zones of dangerous possibility.

Blair Hurley received her B.A. from Princeton University and her M.F.A. from NYU. Her stories are published or forthcoming in West Branch, Mid-American Review, Washington Square, Hayden's Ferry Review, Descant, Fugue, and elsewhere. She has received a Pushcart Prize and scholarships from Bread Loaf and the Kimmel Harding Nelson Center for the Arts. Her debut novel, The Devoted, is due in summer 2018 from WW Norton & Company. She teaches creative writing at McMaster University, the University of Toronto, and online with GrubStreet. 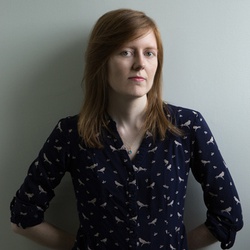