Writing Rules That Were Made to Be Broken: Steer Clear of Dreams

There's a distinctly rebellious air about the Muse and the Marketplace Conference this year. Come April 6-8 at Boston's Park Plaza, #Muse18 presenters will be letting loose on the writing rules that have held our manuscripts hostage for far too long. To kick off the conversation ahead of the Muse weekend, this year's Muse series explores the writing, publishing, and workshop rules, conventions, and accepted norms that authors, agents, and editors at the Muse love to hate -- and why they'd love to see them broken. Some presenters will also offer their own rules or conventions that they want to see adopted in writing and publishing spaces. This installment comes from Xhenet Aliu, the author of the novel Brass (Random House, 2018) and the short fiction collection Domesticated Wild Things and Other Stories (Univ. Neb. Press, 2013). Xhenet will be leading the Muse session Shut Up and Listen: Crafting Literary Voice from Literal Voices.

My subconscious isn’t very sub, so it generally doesn’t take a trained Freudian to crack the code of my dreams. Recurring ones include plane crashes (fear of failure), tornadoes (anxiety), zombies (alienation), and lots and lots of snakes (duh). Dreams are obviously manifestations of the data your brain has been processing before you lay it on the pillow; if the dreams are intense enough, they can linger into and color the whole next day. So if dreams are such an essential part of the human experience, why is writing them so frowned upon? Probably because inexperienced or lazy writers use dreams as a shortcut for doing the work of characterization that’s supposed to be done elsewhere on the page: my character wants this but doesn’t know it until the dream reveals it to her, or other such tidy nonsense. Also, of course, there’s the trick that’s so silly that every undergraduate Fiction 101 workshop has to explicitly forbid it: you cannot end a story with, “It was all a dream.”

But can a little, tiny bit of a story be a dream? I think so, as long as the dream speaks to a character in a way that’s both native and invisible to the character once they wake. It’s not epiphany so much as it is a shifted perspective on the motivations and desires already revealed in the character’s conscious world. And, just as when you’re deciding which of your own dreams are worth sharing with your bed partner in the morning, be prudent in the telling: keep it brief, leave out the tedious parts, and don’t expect anyone to find them as interesting as you do, unless you can render them as viscerally as you could the rest of your fictional, imagined world. Playing with surrealism is fun, but your dream sequence won’t work if it’s so nonsensical as to reveal nothing more about the dream’s psychic origins than an online spam generator would. Likewise, if it’s too literal, there’s probably no point in writing the scene as dream. Fiction is already made up; writing dreams into fiction is like made-up squared, so aim to make that secondary fiction deepen the primary one. If it only obscures it, well, save the dreams for your journal and/or shrink.

Xhenet Aliu is the author of the novel Brass (Random House, 2018) and the short story collection Domesticated Wild Things and Other Stories (Univ. Neb. Press, 2013), winner of the Prairie Schooner Book Prize in Fiction. Her stories, essays, and criticism have appeared in journals such as Glimmer Train, Hobart, Lenny, LitHub, Buzzfeed, The New York Times, Necessary Fiction, American Short Fiction, and elsewhere, and she has received scholarships and fellowships from the Bread Loaf Writers' Conference, a grant from the Elizabeth George Foundation, and a fellowship from the Djerassi Resident Artists Program, among other awards, including a special mention in the Pushcart Prize anthology. She holds an MFA from the University of North Carolina Wilmington and an MLIS from the University of Alabama, where she was an ALFA fellow, studying methods of delivering information services to individuals with disabilities. A native of Waterbury, Connecticut, whose brass industry attracted large waves of Eastern European immigrants before the demise of the factories in the 1970s and '80s, she was born to an Albanian father and a Lithuanian American mother. She now lives in Athens, Georgia, and works as an academic librarian. 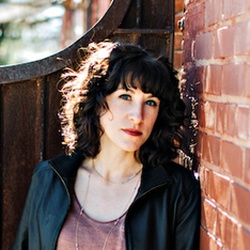