Writing Rules That Were Made to Be Broken: Happily Ever After

There's a distinctly rebellious air about the Muse and the Marketplace Conference this year. Come April 6-8 at Boston's Park Plaza, #Muse18 presenters will be letting loose on the writing rules that have held our manuscripts hostage for far too long. To kick off the conversation ahead of the Muse weekend, this year's Muse series explores the writing, publishing, and workshop rules, conventions, and accepted norms that authors, agents, and editors at the Muse love to hate—and why they'd love to see them broken. Some presenters will also offer their own rules or conventions that they want to see adopted in writing and publishing spaces. This installment comes from Nicole Blades, author of Have You Met Nora? and The Thunder Beneath Us. Nicole will be leading the Muse session Avoiding the Common Pitfalls of Writing About Black Life.

When my now nine-year-old son was in the second grade, there was an incident that went down during class story time that, if pushed to discuss it today, still bothers him. The teacher was reading something like a fairy tale to the class and as she got toward the end, my son mumbled what he thought was going to happen. Turns out, he was spot-on about the ending—and also, that mumble was more of a stage whisper.

A group of girls grew very annoyed with him for what they called “spoiling the story” for the rest of the class. And they kept harping on it for the next few weeks. He had ruined the ending for them and they were not quick to forgive or forget it.

The thing is, my son had not intended to spoil anything. He hadn’t even read the book before. But, as he had explained it to me in a huff, “All of these stories end the same way! The main character gets what they want. It’s so obvious!”

One, my kid is an avid reader, which meant, two, he had figured out the trick/trope behind fairy tales and happy endings. To iron out the second-grade story time wrinkles, I told him that, moving forward, if he guesses the ending then he should only whisper it in his head. But I also told him that he’d soon start reading stories that break that happy ending “rule,” and do so brilliantly. It’s what I aspire to do when I write.

I like stories that are about family, identity, and the search for our best selves, which can often get distorted or magnified by our search for love and understanding or through our relationships to those closest to us. This usually means that the neat and tidy happy ending isn’t so neat or tidy or even happy.

It’s not that I have an issue with Happy Ever After. I get it. Happy endings are good for the soul. They give us hope. With all the obstacles and cruelty and gloom that our real world serves up on a hot plate every day, happy endings help to wash it all down, like a spoonful of honey after a bitter pill.

But I would also argue that there are lessons to be learned from the unhappy ending, too. There’s value in watching a protagonist carrying around all of these shattered pieces without any glue to mend them back or stardust to sprinkle over it or auspicious solutions falling their laps. Instead, maybe we see them pressing forward despite the door slammed shut or a colossal fall from grace or a missed opportunity for forgiveness or love.

Unhappy endings are the opposite of obvious, making them feel realistic and human. They are complicated, but utterly compelling, and can sometimes help us make peace with some of our own wobbly choices. And if all of this adds up to readers feeling a deeper sense of compassion for each other, well, as a writer, you got to feel pretty happy about that.

Nicole Blades is a novelist, speaker, and freelance journalist who has been putting her stories on paper since the third grade. Born and raised in Montreal, Nicole moved to New York City and launched her journalism career working at Essence magazine. She later co-founded the online magazine  and worked as an editor at ESPN and Women’s Health. Nicole's work has appeared in The New York Times, Cosmopolitan, Women’s Health, Good Housekeeping, WashingtonPost.com, MarieClaire.com, SELF, Health, and BuzzFeed. Her latest book, Have You Met Nora?, is out now along with her previous novels The Thunder Beneath Us (Kensington, 2016) and Earth's Waters (DC Books, 2007). Listen to her weekly podcast, "Hey, Sis!," about women finding their focus and place in business, art, culture, and life. 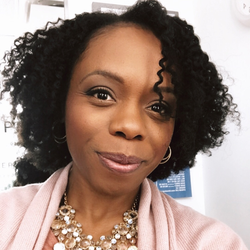