Writing Rules That Were Made to Be Broken: Down with the Exclamation Point!

There's a distinctly rebellious air about the Muse and the Marketplace Conference this year. Come April 6-8 at Boston's Park Plaza, #Muse18 presenters will be letting loose on the writing rules that have held our manuscripts hostage for far too long. To kick off the conversation ahead of the Muse weekend, this year's Muse series explores the writing, publishing, and workshop rules, conventions, and accepted norms that authors, agents, and editors at the Muse love to hate -- and why they'd love to see them broken. Some presenters will also offer their own rules or conventions that they want to see adopted in writing and publishing spaces. This installment comes from Lisa Borders, author of The Fifty-First State. Lisa will be leading the Muse session Rebel, Rebel: Writing Rules that Can—and Sometimes Should—Be Broken.

Pity the poor exclamation point: the Rodney Dangerfield of punctuation marks. This humble little printer’s mark just can’t get no respect, no matter how useful—even vital!—it might sometimes be in writing.

Like many of our most rigid writing rules, this maligning of the exclamation point is nonsense—an over-reaction among professors and editors who have seen the punctuation mark poorly used or abused. In this Seinfeld episode, for example, Elaine’s publisher boss has a right to be concerned about the exclamation points she edited into a manuscript.

But what we writers rarely hear is the counterpoint: the published works that bake punctuation marks into the narration, where its absence would diminish voice, characterization, and emotion. Consider the following passage from Lorrie Moore’s short story “People Like That Are the Only People Here: Canonical Babbling in Peed Onk,” where the narrator has just learned that her infant son has a tumor and might need chemotherapy after surgery.

“‘I’ve never heard of a baby having chemo,’ the Mother says. Baby and Chemo, she thinks: they should never even appear in the same sentence together, let alone the same life. In her other life, the life before this day, she had been a believer in alternative medicine. Chemotherapy? Unthinkable. Now, suddenly, alternative medicine seems the wacko maiden aunt to the Nice Big Daddy of Conventional Treatment. How quickly the old girl faints and gives way, leaves one just standing there. Chemo? Of course: chemo! Why by all means: chemo. Absolutely! Chemo!”

Throughout this story, the narrator uses humor as a defense against her fear of losing her son. In the paragraph above, her internal dialogue builds in emotion as she tries to process devastating news. The exclamation points signal the state of edgy panic she reaches as she wraps her head around the idea of her baby undergoing chemo. Consider the flatness if the punctuation were different: “Chemo? Of course: chemo. Why by all means: chemo. Absolutely. Chemo.” The emotion conveyed there is altered: more resigned, less frenzied.

Lisa Borders' second novel, The Fifty-First State, was published by Engine Books in 2013. Her first novel, Cloud Cuckoo Land, was chosen by Pat Conroy as the winner of River City Publishing's Fred Bonnie Award, and received fiction honors in the 2003 Massachusetts Book Awards. Lisa's short stories have appeared in Washington Square, Black Warrior Review, Painted Bride Quarterly, and other journals. She has an essay in Soap Opera Confidential: Writers and Soap Insiders on Why We'll Tune in Tomorrow As the World Turns Restlessly by the Guiding Light of Our Lives (McFarland & Co., 2017), and has published other essays in The Rumpus, Post Road, and in the anthology Don't You Forget About Me: Contemporary Writers on the Films of John Hughes. She has received grants from the Massachusetts Cultural Council, the Somerville Arts Council, and the Pennsylvania Council on the Arts, and fellowships at the Millay Colony, Virginia Center for the Creative Arts, Hedgebrook, and the Blue Mountain Center. Lisa co-founded GrubStreet's Novel Incubator program, and founded the Novel Generator program. She now teaches in the University of Arkansas at Monticello's online MFA program. More information on Lisa and her work is available at lisaborders.com. 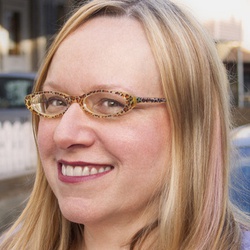