The Writing Rules That Were Made to Be Broken: Beware the Cliché Police

There's a distinctly rebellious air about the Muse and the Marketplace Conference this year. Come April 6-8 at Boston's Park Plaza, #Muse18 presenters will be letting loose on the writing rules that have held our manuscripts hostage for far too long. To kick off the conversation ahead of the Muse weekend, this year's Muse series explores the writing, publishing, and workshop rules, conventions, and accepted norms that authors, agents, and editors at the Muse love to hate—and why they'd love to see them broken. Some presenters will also offer their own rules or conventions that they want to see adopted in writing and publishing spaces. This installment comes from writer and event coach Allison Hoch. Allison will be leading the Muse session Writing Like a Parent, Parenting Like a Writer.

I was sitting at my computer muscling through the first draft of a novel, and I was at a point where I wanted to rend my clothing and pull out my hair. Each word felt like slogging through mud. In the back of my mind pounded the phrase: “Every word must count.” But the weight of that edict made writing any words at all feel impossible. How could I know what the right word was when the story and characters were still taking shape?

So I did it. I broke a cardinal rule. I used a cliché. I even immortalized it on Twitter:

Clichés are crutches. They are overused. They’re corny and all around lazy writing.

Unless you look at a cliché like a placeholder while you’re drafting. That line was overwrought. It made me want to roll my eyes so hard they’d fall out of my head. But it conveyed the sentiment I wanted, when I couldn’t find the right words. And it got me through to the next scene. And the next, and the next. Clichés might be crutches, but sometimes we’re limping to the finish line and we need the extra support.

Forgive yourself the use of clichés. When you go back and revise, take a deep look at each of them. What is the emotion or sentiment you’re trying to convey? Consider if the cliché feels like the most accurate and authentic way to portray those feelings. Then decide what words stay in and which you change. But don’t beat yourself up before you get there. You may need that overused shorthand to get you to the words that count.

Allison Pottern Hoch is a writer and event coach with over eight years of experience in marketing, publicity, sales, and event planning. She spent four years promoting academic titles at The MIT Press before she went to work for Wellesley Books as a bookseller and event coordinator. She organized, hosted, and promoted over 150 events during her tenure, ranging in size from intimate workshops and lunches to multi-media events with over 700 attendees. She worked with veteran authors, celebrities, and debut authors alike. She has a B.A. in Creative Writing from Carnegie Mellon University where she coordinated the Adamson Visiting Writers series. Allison is currently working on her first novel, drinking many cups of tea, and chasing after her two young children. You can visit her website for more information on her workshops and coaching services at http://events.pottern.com. 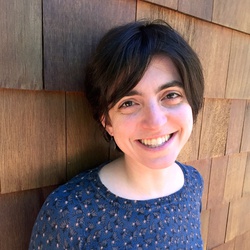