Writers Who Relocate: On Finding Community

There were a million other things to focus on: parenting, work, loading the dishwasher, oh and moving halfway across the country. Grub Street's Launch Lab application deadline came at the worst time. Where in my day of working full time, spending quality time with my son, unpacking boxes, and fighting with the internet company was I going to sit down and fill out the forms? So I didn’t, and I convinced myself that I wouldn’t be missing anything, that it wasn’t worth all the effort. I mean, how much can you really learn about launching your book? It launches, you set up readings, you expect that you won’t sell that many copies. I mean, haven’t I been writing for free the last 12 years anyway?

I told myself I would just be happy to see my writing in print, which is what I had to tell myself to quell the anxiety I faced whenever I thought about the fact that I might actually have some control over the success of my book. (This goes to show you how desperately I needed the Launch Lab.)

But then my friend and former Launch participant, Jenn DeLeon, called to check in about my move from Boston to Chicago. Somewhere in the conversation she told me that Grub Street had extended the deadline. I was elated, and also hesitant. If I got in, that meant three weekends away from my toddler son, time off of work, the guilt of going back to my husband’s home state while he stayed in Chicago watching our son.

“Is it worth it?” I asked Jenn. “Yes,” she said. “Definitely.” And I had heard this similar enthusiasm from other launch lab participants. The instructors, Katrin and Lynne also seemed unusually giddying at any mention of the program.

So I applied at midnight when my son and husband were asleep, the dishwasher was unloaded, and our apartment was quiet. I had no excuses.

Weeks passed. I got busy again with all the things I mentioned earlier.

Then, a few weeks ago, I got an email sharing the wonderful news that I had been accepted into the program. Still, now that it was real, those same reservations arose along with new tasks: booking the flights, figuring out who I could stay with, taking the time off of work, preparing to leave my son for three days—something I had never done before. I called Jenn again, who said, 1.“You can stay with us.” And 2, “Yes it’s worth it.”

So, I went two weekends ago. We had a quest speaker, a binder full of information, and great discussions with our two leaders: Katrin Schumann and Lynne Griffin. I learned so much that I didn’t know I didn’t know. Have you ever had that feeling like, What if I had never learned this? What gutter would I be in right now? Yep. My sentiments exactly.

But here was the most important part of the Launch Lab for me: lunches, and dinner, and the occasional 15 minute break. It was during that time that I got to know the ten other writers: Self published, little houses, big houses, writing short story collections, non-fiction, novels. Writers who came from various parts of Massachusetts, but also Mississippi and Texas. Writers whose books are going to astound you. Seriously, my dear readers, you are in for an amazing year of page-turning.

During lunch I had a choice: do work or make friends. And for me this is always a hard choice. One thing that I’m pretty good at is time management. There is rarely a leisurely or procrastinating moment in my schedule. A 10 minute wait at the pharmacy? Enough time to reply to emails about a class I’m teaching. A 20 minute walk to yoga? Enough time to call our property manager, and the cable company, and my mom.

But an entire hour? To myself? I haven’t had that luxury in the 16 months since my son was born. I had a manuscript to review for a consult, a project for work, bills to set up online. The list was endless. You know that long long long list you all have? Well mine was tugging at my pant leg. Incessantly. Also, if I chose to do work over lunch, then I wouldn’t have to face the awkwardness of meeting new people.

But, then, I asked myself why I was here. Wasn’t part of it to build my community? So, that Friday, I went to lunch with two women from the group and learned fascinating things about their very different book topics: architecture and terrorism. And, when all of us came back from eating, the classroom was full of chatter. I could tell that the other writers had had the same experience.

On Friday night, three former Launch Lab-ers: Maria Mutch, Tasneem Zehra Husain, and Ilan Mochari came to chat with us and hang out for dinner afterwards. When asked what the most beneficial part of the program had been for them, they answered: the Logic Model and the building of community. They attended each others’ readings, paired up for events, and shared advice through their group’s Facebook page. And you could see it—the Launch Lab Love. At one point, Ilan was praising Maria’s book so genuinely that she got up and hugged him.

I was exhausted by the end of the weekend, and I know I wasn’t alone. It was that fabulous kind of exhaustion you feel after a full-day writing seminar or conference, when you’ve written pages of notes or a list of story ideas and your head is just bouncing bouncing bouncing, and you’re so wired you could party all night and so very very tired you could sleep on the sidewalk.

When my husband picked me up on Sunday, I was so giddy to see him that I couldn't stop staring at his wondrous face. And my son who was sleeping in the back seat? It took all of my energy not to wake him up and blow raspberries on his belly. But then Jamie asked how the program was.

The first thing I said?

One of the authors from our group, Alice K. LoCicero, just launched her book. It’s called Why Good Kids Turn Into Deadly Terrorists. From the description Alice gave over lunch, I can’t wait to read it. I bet you can’t either. So, go ahead. Read it.

Don’t worry, over the next year, I’ll be telling you about all of the other books as they come out. It’s like having nine more amazing secrets, and I want to tell you all so bad—about the beautiful book covers the Launch authors showed us on their laptops, about plots that just blew me away. But think of it as a gift you’ll get with each monthly blog post:)

Nadine Kenney Johnstone is the author of the memoir, Of This Much I'm Sure, which was named Book of the Year by the Chicago Writers Association. Her infertility story has appeared in Cosmopolitan, Today’s Parent, MindBodyGreen, Metro, and Chicago Health Magazine, among others. She teaches at Loyola University and received her MFA from Columbia College in Chicago. Her other work has been featured in various magazines and anthologies, including Chicago Magazine, PANK, and The Magic of Memoir. Nadine is a writing coach who presents at conferences internationally. She lives near Chicago with her family.

See other articles by Nadine Johnstone 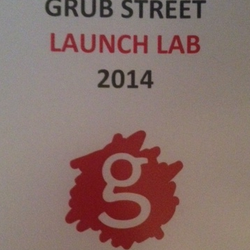