The Muse and the Marketplace 2020 will soon kick off on April 3rd in Boston! This year’s theme is “Imagination and Reality,” as many presenters are exploring the boundaries between fact and imagination, and how each contributes to great writing. Here, presenting authors have selected a passage from their own work, highlighting in green which elements came roughly from their direct experience, memory, or fact; while highlighting in blue which elements came from their imagination or speculation.  In this post, Muse presenter Hank Phillippi Ryan shares an excerpt from her latest psychological thriller, The Murder List.

“I know you’re upset.” I decide on instant capitulation and a subject pivot. "But even you have to lose a case once in a while. Especially since your client, you know, did it."

“That shouldn’t matter. Or are your profs holding back that tidbit until your third year?” "Jack flaps the newspaper to a new page. Hiding the DORN DID IT headline I know is there. “That jury of morons wanted someone to be punished. And Gardiner had the judge in her pocket.”

“I know. It stinks. I know. It does.” This morning hadn’t been the optimum time to spring the Gardiner situation on him, but it’s the only time. Harvard had emailed the final 2L internship assignments to us late last night, and our jobs start this coming Wednesday. I could hardly hide reality, and, besides, I’m excited. Nervous but excited. Still, life’s a juggle when your husband is cranky.

Jack’s old plaid Saturday shirt is buttoned wrong, his hair like windblown straw. He’s bitter over every courtroom loss, so we’ve ridden out a few iterations of this before.

The second newspaper headline reads “Jury to Jack Kirkland: Drop Dead.” I’d almost hidden the paper from him, a gesture in affectionate futility.

"But it was a murder-list case,” I say. Maybe I can provide some comfort, or some logic. “Marcus Dorn was lucky to have the state appoint you as his attorney. You can’t help it if your key witness decided to vanish. Plan the appeal, honey, you’ll win. You’re the best defense lawyer in Boston. Or anywhere.”

"Appeals take years." Jack stands, tosses the paper to the floor, paces to the window.

Our tiny garden’s perennials are flourishing in this spring’s incessant rain, but I figure he’s not thinking about peonies or pink thyme. He’s replaying that verdict. He truly cares about justice, defending his clients, even the ones he knows are guilty. It’s one of the reasons I married him. And he almost always wins. Another reason.

“Martha Gardiner’s doing this to screw with me,” Jack says, turning back to me. “Like she tries to every damn day in court. She’s using you, Rachel. Are you too naïve to see that? This is about me. Can you possibly have some misguided notion that this is about you?”

This is a segment from my current psychological thriller, The Murder List.  My husband, a criminal defense attorney, is actually on “the murder list,” the list of lawyers qualified and experienced enough to be appointed by the state to represent indigent defendants who are charged with murder.  Since the stakes are so high, the state believes the justice system is best served by having them have the best defense possible. (Of course, “the murder list” has several meanings in the book.)

Some of the green, I admit, is a bit like my husband — he’s unhappy and grumpy when he loses a case.  Sometimes he — and many people — do feel that juries convict because they want “someone” to be punished, even if they’re not quite sure the defendant is the guilty one. Who knows what goes on in a jury room, right? So this scene is also a big foreshadowing in this book. And I have considered hiding headlines from him, though, like Rachel, I never did it.

The “Marcus Dorn” murder case is based on a real murder in Boston — but the facts of it are not relevant, and that’s not the real name of the defendant.

The blue? I’m not a lawyer and have never been to law school, so I’ve never had a law internship, let alone in the District Attorney’s office. And Rachel is getting ready to reveal to Jack that she’s about to take a job with her husband’s mortal enemy.

What’s un-blue-or-greenable in this is my goal — which is to have the reader think Rachel has no agenda here other than to convince her husband to let her take this summer internship. She knows it’s a massively life-altering move for her — though he, annoyed and derisive, sees it as all about him.  Husbands and wives certainly have differences of opinion, and that’s another key of this book. Is this me talking to my own husband? Not at all, not even close. Still, ulterior motives? Sometimes I have them. My husband probably does, too. But I would never go to work for his sworn enemy, no matter how much it might help my career.

You can catch Hank’s craft discussion, "Perfecting Page One" on Friday, April 3rd at 9:00am at the Muse. For all the latest Muse news, follow #Muse20.

Hank Phillippi Ryan is the on-air investigative reporter for Boston's WHDH-TV. She's won 36 EMMYs and dozens more journalism honors. The nationally bestselling author of 11 mysteries, Ryan's also an award-winner in her second profession—with five Agathas, three Anthonys, two Macavitys, the Daphne, and for The Other Woman, the coveted Mary Higgins Clark Award. Critics call her "a master of suspense" and "a superb and gifted storyteller" and she is the only author to have won the Agatha in four different categories: Best First, Best Novel, Best Short Story and Best Nonfiction. Her novels have been named Library Journal's Best of 2014, 2015 and 2016. Her highly-acclaimed first standalone psychological suspense, Trust Me, is an Agatha Nominee and was also named a Best Thriller by New York Post, BOOKBUB, Real Simple Magazine, CrimeReads and Criminal Element. Hank’s newest book is the psychological legal thriller The Murder List. It was named a CNN Ultimate Beach read, and New York Times bestseller, Liv Constantine, calls it “an exhilarating thrill ride,” A.J. Finn says, “exciting, explosive, relentless,” B.A. Paris says it’s “her best yet,” and Library Journal starred review says, “Masterly plotted—with a twisted ending—a riveting, character-driven story.” Hank is a founder of MWA University and past president of National Sisters in Crime. For more, go to www.hankphillippiryan.com.

Hank Phillippi Ryan is the investigative reporter for Boston's NBC affiliate. A television journalist since 1975, she has won 27 Emmys and ten Edward R. Murrow awards for her work. A best-selling author of four mystery novels, Ryan has won the Agatha, Anthony and Macavity awards for her crime fiction. She’s on the national board of directors of Mystery Writers of America (and an instructor at MWA-U) and vice president of National Sisters in Crime. Her newest suspense thriller,The Other Woman, is the first in a new series beginning in 2012 from Forge Books.

See other articles by Hank Ryan 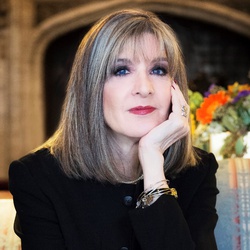