About
Writing the Family

What We Want out of Workshops

In this post, GrubStreet Instructor Ben Berman thinks about the importance of both praise and scrutiny when participating in writing workshops.

It was my four-year-old’s first day at her new school and she was clinging to my leg so tightly that I was beginning to lose circulation. Don’t leave me, she kept saying, as though I was abandoning her at an orphanage.

We knocked on the door. An older woman opened it and without even knowing my daughter’s name, scooped her into her arms and told her that she loved her. She put my daughter down and led her to her cubby, stopping to hug her three more times before they reached the classroom.

My daughter hung up her jacket, put her blankie in her bag then ran off to explore the play area without even glancing my way.

Maybe it was because I was about to teach a writing class, but I couldn’t help but wonder what it would be like if workshops worked this way.

The genuine thing in us is much too fragile, writes Kay Ryan, to tolerate the kind of peer pressure or superior pressure of most writing programs or workshops.

And yet how often we show up with a poem that’s only half finished—that’s clutching on to us with fear—only to hand it over to strangers to scrutinize.

How empowering would it be if we trusted that the other people in the room were there to greet it with open arms and affirmations, to nurture it, to offer it love?

I was imagining what this might look like when the teacher raised her hand for the kids to line up.

This was my cue to leave and I was about to wave goodbye when another boy—about twice the size of everyone else—walked on over to my daughter and shook his fist in front of her face. And then, in a voice way too deep and raspy for any preschooler, said, I’m really mean.

I have never wanted to dropkick a four-year-old so badly in all my life.

I watched my daughter eye this boy up and down and then look right past him, let him know that she wasn’t intimidated, that she wasn’t about to come running to me for help.

And I realized that this, too, is what we want when we bring a poem to a workshop.

Our poems are precious to us in ways that no one else will ever understand. We desperately want people to love them and slather them with praise.

But we also want to see that they won’t fold under a little scrutiny.

And as I watched my four-year-old stand on her little green circle with such poise and confidence, I couldn’t help but think of an old writing teacher who used to remind the class—whenever he’d sense one of us getting defensive—that the poem must learn to travel to the mountaintop alone.

Join Ben Berman at Trident Booksellers this Thursday, December 13th as he reads from his new book, Then Again, with Jan O’Neil and Dzvinia Orlowsky.

Ben Berman’s first book, Strange Borderlands, won the 2014 Peace Corps Award for Best Book of Poetry and was a finalist for the Massachusetts Book Awards. His second collection, Figuring in the Figure, was recently selected as a Must-Read by the Mass Center for the Book. And his new book, Then Again, came out last November. He has received awards from the New England Poetry Club and fellowships from the Massachusetts Cultural Council and Somerville Arts Council. He teaches at Brookline High School and lives in the Boston area with his wife and two daughters. www.ben-berman.com

See other articles by Ben Berman 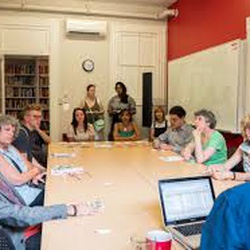 The Workshop The Writing Life