Memories of the Muse & the Marketplace

I'm going to start with a confession: I hardly wrote any notes while attending the 15th annual Muse & the Marketplace conference this past weekend. I was so immersed in the experience, so enjoying the sessions, the eager crowd of attendees, the brilliant authors, that I allowed myself to absorb it without the pressure of trying to capture it in words. So when I looked over my conference packet to put together this insightful blogpost, I found a whole lot of nothing.

Sunil Yapa (Your Heart is a Muscle the Size of a Fist) telling us that structure comes after character development. That there is no shortcut to the hard work of writing. Suggesting such a simple and yet effective trick to get your story moving, using the prompts:

No, and furthermore... (my favorite)

Jennifer Haigh (Heat and Light) declaring that she doesn't believe in villains. That they're rare in real life and boring in fiction. "Fiction is an exercise in empathy," she added, in her mellifluous voice.

Dariel Suarez (In the Light of Tropical Martyrs) talking about how his entire neighborhood slept on their porches in the oppressive summer heat in his native Cuba (talking, drinking, carousing), during the frequent power outages. How these memories of his youth remain vivid and meaningful to him, yet he had to expunge them from his novel--all for the sake of the bigger story.

Roxana Robinson (Sparta) asking what it feels like to have someone else write about you — to have no control over what they say. Struggling, again, with the question: When is a story ours to tell? Understanding, again, that this is what writers do — they tell people's stories.

Colum McCann (Thirteen Ways of Looking) admonishing us all during his keynote: Don't be a dick. His deep, public blush when Marjan Kamali (Together Tea) warned him over the mic that she was falling in love with him. The idea of radical empathy. The idea of writing toward what you don't know.

Stacy D'Erasmo (Wonderland), in her cool culotte skirt, sharing that her students write far better prose — more creative, tighter, less confessional, more moving — when they write anonymously. Asking us to think about what this means, how we might use this to become better writers. "Write toward the reader, not other writers."

Hearing raucous laughter outside the room during Lynne Griffin's session (Girl Sent Away).

Chatting with brain scientist — and super friendly guy — Steven Pinker (The Sense of Style) about becoming an American and what that means, about Boston and its challenging social ecosystem, under the photograph of him and his wife Rebecca Goldstein (Plato at the Googleplex) just chilling with the Obamas at the White House.

Robin McLean (Reptile House) sharing with me the concept of the "Jedi mindset." With it, you can achieve your dreams!

Martha Graham Cracker belting out 80s tunes, whipping us all into a frenzy of laughter and managing, at the same time, to suggest poignancy and vulnerability. Hairy shoulders emerging from her shiny red minidress.

But this is just scratching the surface. There was so much more. If you attended the conference, what are your memories? 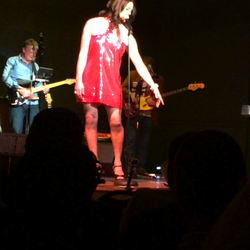