"To Wander Sentence By Sentence" Imagination and Reality with Michael Zapata

Though Muse and the Marketplace 2020 was sadly cancelled, we still want to share blog posts that presenters wrote about our theme “Imagination and Reality.” In this blog series we asked presenters to explore the boundaries between fact and imagination, and how each contributes to great writing. Here, authors have selected a passage from their own work, highlighting in green which elements came roughly from their direct experience, memory, or fact; while highlighting in blue which elements came from their imagination or speculation. In this post, Muse presenter Michael Zapata shares an excerpt from his novel The Lost Book of Adana Moreau.

At three, Maxwell Moreau began to wander. He liked sound and light and he followed it everywhere like how the ancient Hebrews followed celestial clues and iconographic fever dreams in the desert. One day a hornet entered the house on Melpomene Avenue and stung Maxwell. He didn’t cry. In fact, when the hornet flew out the back door and into a garden of sunflowers, Maxwell followed it. The hornet flew into another yard and then another before finally landing on a tree. A dog with a half-black muzzle was chained up to the tree and when it saw Maxwell it began to bark. Maxwell thought that the dog was even more interesting than the hornet. He walked over to the dog, but stopped just short of the length of the chain. The dog barked and barked and Maxwell smiled and smiled. He teased the dog and because Maxwell was canny like Sisyphus he eventually figured out how to untie the dog without the dog biting him. The dog disappeared for some time and Maxwell waited. Just before dusk, the dog returned and lay down near the tree. Then Maxwell lay down near the dog with his body pressed against the earth, a pulsating earth with heartbeats, which were the dog’s heartbeats, and tremors, which were the tremors of the City, and murmurs, which were subterranean rivers slipping into the lower Mississippi. He then slept in complete peace, and this is how his mother found him.

The excerpt above is taken from the first section of my novel The Lost Book of Adana Moreau, which takes place in New Orleans in 1923. I wrote this excerpt rather quickly, without any intention except to wander sentence by sentence, much like how Maxwell wanders here as a child and much as I did, notoriously, as child, ultimately taking László Krasznahorkai’s accidental advice on writing in his brilliant novel The Melancholy of Resistance to heart: “…through constant, wholly involuntary adaptations to the moment-by-moment nature of necessity…owing nothing, absolutely nothing, to concentrated logic and everything to improvisation.”

It’s so difficult to imagine your own childhood, to project worlds you cannot possibly remember accurately onto entirely other fictional worlds. Memory is a warren, illusory, and, yet, it’s one of the only material things we have to rely on as writers. I remember (or think I do) a hornet, a fervent sting, a little bravery as I wandered off, a long peaceful nap pressed against a dog. My mother, of course, must have found me. The brain’s hippocampus accesses details from episodic memories, but also predicts parallel futures, imagines all the “what ifs.” By surviving childhood, writers have all the pasts and futures they will ever need.

Michael Zapata is the author of The Lost Book of Adana Moreau (Hanover Square Press/HarperCollins). He is a founding editor of the award-winning MAKE: A Literary Magazine. He is the recipient of an Illinois Arts Council Award for Fiction and the City of Chicago DCASE Individual Artist Program award. His stories have appeared in Evergreen Review, Another Chicago Magazine, and Fifth Wednesday Journal, among others. As an educator, he taught literature and writing in high sch0ools servicing drop out students. He is a graduate of the University of Iowa and has lived in New Orleans, Italy, and Ecuador. He currently lives in Chicago with his family. For more, go to www.michaelzapata.com. 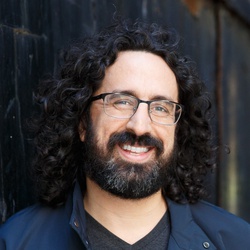