GrubStreet runs on coffee, printer ink, and community. This series features just some of the Grubbies who make our community strong. In this edition, meet Grub Instructor Jenn Scheck-Kahn. You can catch Jenn in person this September, in her eight-week class, Literary Magazines: a 360 Degree View, starting Friday, September 8th.

What author, living or dead, would you most like to have dinner with and why?

Barack Obama. Barbara Pym or Michael Ondaatje or Vladimir Nabokov would have elbowed him out at other points in my life but this year, it’s Barack. He’s also a permanent resident on my Stranded on a Desert Island List--you know, the five people with whom you’d most like to gather coconuts and catch rainwater in leaves until the secret service rescues the lot of you--but that’s a different matter entirely. Call it foolish nostalgia or necessary self-care, but dinner with Barack would be good for the mind and the soul.

So, I need to confess this: As a student I despised writing prompts. No matter how often they proved their merit, which happened more often than not, I approached them with contempt, impudence, and sometimes willful paralysis. I yearned to complete a story--go the distance, not stretch the muscles.

So, as an instructor, I expect writing prompts to summon the inner contrarian in students and prefer to devise a raucous activity. For example, in the Muse & the Marketplace session I taught on literary magazines this past spring, students looked over the visual design of four literary magazines, and after reading a brief biography of each, I read the start to a story or essay aloud and asked students to guess in which magazine it was published. The first person who guessed correctly won a copy of the magazine.

I like this style of activity because it’s fun and no one but me knows the right answer definitively--everyone is venturing a guess--and that creates an immediate sense of trust, which relaxes students and makes them more receptive. While I aim to impart some concrete information, the main goal of the Muse activity was to train the intuition: create, in this case, an opportunity where students can use their observations to discern a literary magazine’s brand identity. That’s a skill that, once honed, they will apply to every literary magazine they read.

What are you reading?

Right now, I’m about halfway through The Sympathizer, by Viet Thanh Nguyen (my morning read), a few essays into Michigan Quarterly Review (my beach read), and nearly finished with Alice Munro’s Selected Stories, 1968-1994 (my in-between read).

What is the toughest criticism to give or receive on writing?

First off, let’s set aside the cruelest criticisms--you’re not mature enough to write this kind of essay; no one wants to hear this story--which are given by neophyte critics who wrongly evaluate the writer, not the writing. Soul crushing as these comments are, their damage reveals more limitations in the reviewer than the writer, by presuming a writer’s ability and ability to learn are at a dead end. It’s nonsense--no one can tell you that you aren’t able to learn.

What qualifies as a tough criticism is particular to the constraints of the writer. There’s no universal cracking point, but if there were, the pressure chamber might be fueled by these: A character that’s not believable, tone and pacing that are off-key, a narrative that hasn’t yet found a way to make itself vital to an audience.

But here’s the thing: When feedback is given by someone who understands and honors your persistence and intelligence, someone who can point out a new way into the material that will guide you to a changed perspective, it doesn’t matter how grand the sticking point is, you will feel hopeful about the prospect of change. That will, no doubt, lead to new skills for your writer’s toolbox and a better draft.

In a class I took with Paul Harding, he told us to write the story we weren’t smart enough to write: The process of writing will make us that smart. Isn’t that our goal after all? As the demands of our writing continue to deepen, our abilities will continue the rise to meet them.

Sangria. Even at a restaurant that serves them up weak and watery, I can’t resist ordering one because I’m ridiculously optimistic.

A server at a fish taco stand, typist of interviews in the “home” office of one-man publishing company, a clerk in a video rental store, a camp counselor for a traveling theater camp: My teens and early twenties were a dumpster of bad and weird means of temporary employment, but the most rotten was a job for which I earned no money.

Being an English major, I thought I might someday work in publishing, and when I was home from college one summer, I pursued a small press at a local university for an opportunity. My job involved the worst kind of proofreading: I had to compare two versions of a document, a digital copy made by an imaging device and the original. The document, however, was a transliterated Russian text, meaning it used Latin characters that phonetically spelled out Russian words. So I looked over words I couldn’t read or pronounce and compared them character by character and line by line. It was maddening. I may have found two errors before giving up on the book and later, and for other reasons, a career in publishing.

Want to find out more about all the other amazing people who make the GrubStreet community what it is? Check them all out here! And while you're at it, see what other classes are on offer at Grub this fall.

See other articles by Jenn Scheck-Kahn 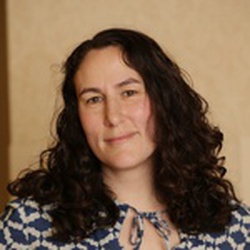