Here at Grub HQ, we're always talking about the books that keep us up at night, the novels we can't put down, the memoirs that call to us over our morning coffees. Every month, we'll share our staff's latest literary obsessions to add to your own never-ending reading list.

Alison, Director of Programs and Marketing, is reading Viet Thahn Nguyen’s The Sympathizer in preparation for her interview with him next week. She also started Michelle Hoover’s Bottomland for some eerie bedtime reading.

Program and Advocacy Manager Jonathan just finished the hilarious and compelling Blackass by A. Igoni Barrett, with whom he recently discussed Kafka, imagined audiences, and the politics of language on GrubWrites.

Executive Director Eve re-read Ta-Nehisi Coates's Between the World and Me — she was invited to an interracial discussion of the book and wanted to be prepared. She also finished Marlon James's A Brief History of Seven Killings. Next up on her list: Ron Chernow's Alexander Hamilton.

Head Instructor Chip is reading Elena Ferrante’s second Neapolitan novel, The Story of a New Name. Once again: book cover bad, novel good. He also just started reading Born to Run by Christopher McDougall, a nonfiction book that centers on a tribe of extraordinary runners in the remote Copper Canyons of Mexico — a gift of Ian’s from the book exchange.

Muse Conference Assistant Director Sonya is learning about the inherent drama of periodic sentence structure and intransitive verbs in Ellen Bryant Voigt's The Art of Syntax, a marvelous book about, well, syntax.

Executive Assistant Grant is finishing Michelle Hoover's Bottomland and also revisiting sections of A People's History of the United States by Howard Zinn, because he apparently doesn't get enough politics from everything else he consumes throughout the day (House of Cards, anyone?).

After finishing Ta-Nehisi Coates's Between the World and Me — which, like most others on staff, he found powerful in every way — Artistic Director Chris has been reading grad school applications and submissions to a novel contest. The next books on his nightstand, which he hopes to get to as quickly as possible, are Michelle Hoover's Bottomland and Dawn Tripp's Georgia.

Programs and Marketing Assistant Kate is reading The Mersault Investigation by Kamel Daoud, a critical reimagining of Albert Camus's The Stranger informed by the legacy of French colonialism in Algeria.

Sarah, Grub's Marketing and Community Engagement Manager, most recently read Christopher Castellani's deeply perceptive new craft book The Art of Perspective, in preparation for the intense, expansive, and insightful conversation about free indirect discourse and the modern novel she had with Chris last week (soon to be published on GrubWrites!). Next up is Omar Musa's debut novel, Here Come the Dogs. Musa is a Malaysian-Australian poet and rapper, and a quick glance at the novel when it came this morning suggests that it will be everything you'd want from a multi-cultural international poet rapper turned novelist. Needless to say, the whole office is excited about this one. (Stay tuned for a conversation with Musa next month!) 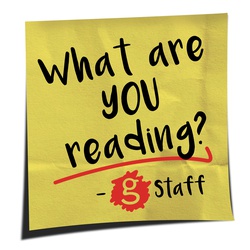