Join Porter Square Books and Grubstreet on October 12th at 7PM (ET) for the latest installment of the Grubbie Debuts series, featuring GrubStreet Memoir incubee Michelle Bowdler for the paperback release of her debut memoir, Is Rape a Crime?: A Memoir, an Investigation, and a Manifesto. Michelle will be joined in conversation by  Lacy Crawford, author of Notes on a Silencing, A New York Times Editors’ Choice and Notable Book. The conversation will focus primarily on the craft of memoir writing. This event is free and open to all, hosted on Crowdcast. Register here.

About Is Rape a Crime?: A Memoir, an Investigation, and a Manifesto

"This standout memoir marks a crucial moment in the discussion of what constitutes a violent crime."

She Said meets Lucky in Michelle Bowdler's provocative debut, telling the story of her rape and recovery while interrogating why one of society's most serious crimes goes largely uninvestigated.

The crime of rape sizzles like a lightning strike. It pounces, flattens, destroys. A person stands whole, and in a moment of unexpected violence, that life, that body is gone.

Award-winning writer and public health executive Michelle Bowdler's memoir indicts how sexual violence has been addressed for decades in our society, asking whether rape is a crime given that it is the least reported major felony, least successfully prosecuted, and fewer than 3% of reported rapes result in conviction. Cases are closed before they are investigated and DNA evidence sits for years untested and disregarded

In 1984, the Boston Sexual Assault Unit was formed as a result of a series of break-ins and rapes that terrorized the city, of which Michelle’s own horrific rape was the last. Twenty years later, after a career of working with victims like herself, Michelle decides to find out what happened to her case and why she never heard from the police again after one brief interview.

Michelle Bowdler is the author of Is Rape a Crime? A Memoir, an Investigation, and a Manifesto. Her debut book was longlisted for the National Book Award for Nonfiction, named a Must Read by TIME Magazine and the Massachusetts Book Awards as well as on the Best Books list for the Boston Globe, Publisher’s Weekly and Book Page. She is the recipient of a Barbara Deming Memorial Award and has been a Fellow at MacDowell and Ragdale. Her essays have been published in two anthologies, the New York Times, Literary Hub, Psychology Today, Hippocampus, Brevity and other journals, and twice nominated for a Pushcart Prize.

Lacy Crawford is the author of fiction and nonfiction, including the satire Early Decision (Morrow 2013) and the memoir Notes on a Silencing (Little Brown 2020). Notes on a Silencing was named a New York Times Editors’ Choice and Notable Book, as well as a Best Book of 2020 by Time, People, NPR, BookPage, Library Journal and LitHub. Lacy’s work has appeared in The New York Times, Wall Street Journal, Narrative, LitHub, and Vanity Fair and her literary journalism includes interviews and profiles of Frank Conroy, Reynolds Price, Geoffrey Wolff, and Shirley Hazzard. She lives in California with her husband and three children.

You can register for this free event here. 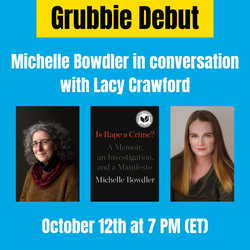