We're delighted to present the latest installment in the Grubbie Debut series, featuring E.B. Bartels. Her debut, Good Grief: On Loving Pets, Here and Hereafter, is an unexpected, poignant, and personal account of loving and losing pets, exploring the singular bonds we have with our companion animals, and how to grieve them once they've passed. Kelly J. Ford will join E.B. in conversation.

E.B. Bartels has had a lot of pets—dogs, birds, fish, tortoises. As varied a bunch as they are, they’ve taught her one universal truth: to own a pet is to love a pet, and to own a pet is also—with rare exception—to lose that pet in time.

But while we have codified traditions to mark the passing of our fellow humans, most cultures don’t have the same for pets. Bartels takes us from Massachusetts to Japan, from ancient Egypt to the modern era, in search of the good pet death. We meet veterinarians, archaeologists, ministers, and more, offering an idiosyncratic, inspiring array of rituals—from the traditional (scattering ashes, commissioning a portrait), to the grand (funereal processions, mausoleums), to the unexpected (taxidermy, cloning). The central lesson: there is no best practice when it comes to mourning your pet, except to care for them in death as you did in life, and find the space to participate in their end as fully as you can.

Punctuated by wry, bighearted accounts of Bartels’s own pets and their deaths, Good Grief is a cathartic companion through loving and losing our animal family.

E.B. Bartels is a nonfiction writer, a former Newtonville Books bookseller, and a GrubStreet instructor, with an MFA from Columbia University. Her writing has appeared in Catapult, Electric Literature, The Rumpus, The Millions, The Toast, and The Butter, among others. She is the author of Good Grief: On Loving Pets, Here and Hereafter, a narrative nonfiction book about the world of loving and losing animals, exploring the singular nature of our bonds with our companion animals, and how best to grieve for them once they’ve passed away. E.B. lives in Massachusetts with her husband, Richie, and their many, many pets.

Kelly J. Ford is the author of Real Bad Things, coming Sep 1, 2022 from Thomas & Mercer, and  Cottonmouths, named one of 2017’s best books of the year by the Los Angeles Review  and featured in the “52 Books in 52 Weeks” from the Los Angeles Times . An Arkansas native, Kelly writes about the power and pitfalls of friendship, the danger of long-held secrets, and the transcendent grittiness of the Ozarks and their surroundings. She lives in Vermont with her wife and cat. 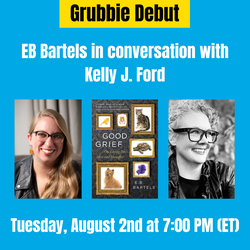