Countdown to Muse 2022: Finding Your People by Jane Roper

As we count down to the conference, we are asking presenters, agents, and editors to tell us about who has enabled or enriched their own writing or literary life, and how that relationship began. Our next presenter in the series is Jane Roper, author of Double Time: How I Survived–and Mostly Thrived–Through the First Three Years of Mothering Twins and Eden Lake.

It had been a long time since I’d taken a writing class. But in the fall of 2019, two-hundred pages into a new novel, after having failed to sell the previous one I’d written, I needed a reality check. My book in progress was unlike anything I’d written before, and I had no idea if I was pulling it off. So, at the urging of a friend, I signed up for Jenna Blum’s Master Novel class at GrubStreet.

I wasn’t looking for new writer friends. I had plenty of those. I just wanted your average writing workshop: nice folks who would trade feedback, connect on social media, and call it a day. But from the first night, it was clear that there would be nothing average about this class.

The energy level in the room was insane. The enthusiasm and warmth and insight were off the charts. During our first few sessions, we laughed and applauded so loudly and frequently that the people in the class next door complained—repeatedly. When we workshopped a class member’s novel based on the legend of Paul Bunyan, we all showed up in lumberjack plaid. When we had a holiday party, we dressed in sequined onesies furnished by the professional singer in our class. When our fearless leader’s dog crossed the rainbow bridge, we mourned together with her.

Some of us were published and some weren’t, but it didn't matter. We were all equals in that class. And I quickly found that, with twelve smart, kind, and (bonus) extremely bawdy people believing in my book, it was a lot easier for me to believe, too. To this day, we all remain in close touch, both in-person and via an epic text thread.

As writers, we know there’s no magic formula for dissolving the mountains of self-doubt and despair that come with the job. But a merry band of new writer friends is definitely not a bad place to start.

Jane Roper is the author of a memoir, Double Time: How I Survived–and Mostly Thrived–Through the First Three Years of Mothering Twins, and a novel, Eden Lake. Her novel The Society of Shame will be published by Anchor Books in 2023. Jane’s writing has appeared in Salon, McSweeney’s Internet Tendency, The Millions, Poets & Writers, The Rumpus, Cognoscenti, and elsewhere, and was included in the anthology Labor Day: True Birth Stories by today’s Best Women Writers. She has taught writing at GrubStreet, Follow Your Art Community Studios, The University of Iowa, and elsewhere and is the host of the author interview series "The Zeitgeist" on A Mighty Blaze. Jane is also a copywriter and brand strategist. She lives outside of Boston with her husband and rad teenage twins. For more information, see Jane's website. 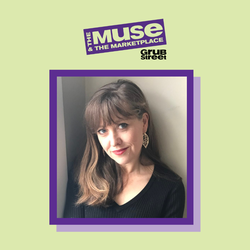