Countdown to Muse 2022: Finding Your People by Henriette Lazaridis

As we count down to the conference, we are asking presenters, agents, and editors to tell us about who has enabled or enriched their own writing or literary life, and how that relationship began. Our next presenter in the series is Henriette Lazaridis, author of the best-selling novel The Clover House.

When she was a little girl, my daughter already had an uncanny sense of story. No matter what we were reading or watching, she knew what was going to happen next. Even the first time through a story, she just knew. When she was about ten, I finished my first ever draft of a novel, and she was so happy for me she lifted me off my feet (she was already taller than me, and apparently quite strong).

A few years later, when I was furiously revising a different novel that became my debut, she was a teenager, and we were both up at all hours of the night. I would call over to her across the kitchen with questions about what my character should do, A or B, and her answers came with confidence. I was not surprised at all when she became a novelist, with her third book coming out next month.

I learned everything I know about writing from my daughter. Time and time again, she has helped me figure out what my novel needs to do. Time and again, when I’m describing the book during a brainstorm, she’ll push me to find action beyond theme and idea. But what happens, Mom? she’ll ask.

We’ve never shared work. We keep a sort of firewall between our manuscripts on purpose. We each need to not feel influenced in so direct a way by each other. And that’s fine with me because she’s influence enough already. She pushes me to be better, cheers me when I’m done, and, most of all, reminds me what a wonderful thing it is to tell a story.

Henriette Lazaridis' novel Terra Nova will be published in Fall 2022. She is the author of the best-selling novel The Clover House. Her short work has appeared or is forthcoming in publications including ELLE, Forge, Narrative Magazine, Salamander, New England Review, The Millions, The New York Times, and Pangyrus, and has won her a Massachusetts Cultural Council Artist Grant. Having taught English at Harvard, she now teaches at GrubStreet in Boston. In the summer, she runs the Krouna Writing Workshop in northern Greece. henriettelazaridis.substack.com. 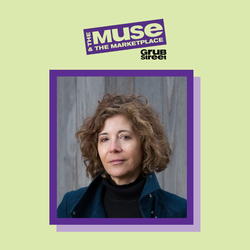