Countdown to Muse 2022: Finding Your People by Ann Hood

As we count down to the conference, we are asking presenters, agents, and editors to tell us about who has enabled or enriched their own writing or literary life, and how that relationship began. Our next presenter in the series is Ann Hood, author of the bestselling novels The Knitting Circle, The Obituary Writer, and The Book That Matters Most; and the bestselling memoirs Kitchen Yarns: Notes on Life, Love and Food, and Comfort: A Journey Through Grief.

“Excuse me, Miss Hood?” my gravelly voiced fiction writing teacher said as I tried to slink out the back door of the classroom.

“I’d like to speak to you privately,” he continued.

I stood, frozen, half-in and half-out of the room.

“Are you available Thursday afternoon to come see me at home?”

“Okay,” I said, terrified. Surely he wanted to tell me to stop wasting his and my time with these stories I was writing about three friends who’d gone to college together in the 1960’s and what had happened to them since.

Bill Decker was, I thought back then in 1984, ancient (he was actually only fifty-seven). A former executive editor at Viking, he’d worked with Larry McMurtry on The Last Picture Show, Earnest Gaines on The Autobiography of Miss Jane Pitman, Katharine Anne Porter, and Wallace Stegner. His own 1967 novel that no one has heard of, To Be A Man, was named one of the best books of the year by The New York Times. He told our class of wannabe writers stories about asking Jackie (as in Onassis) to fetch him coffee and visiting Mary (as In Hemingway’s last wife) in Idaho. He was tough, intelligent, opinionated, and an excellent reader of our stories.

That Thursday afternoon I showed up at his apartment looking over Washington Square Park, the Arch gleaming in the spring sunshine. Bill sat behind a massive wooden deck, in a study lined with crowded bookshelves. I sat across from him. I was a twenty-eight-year-old TWA flight attendant with fifty pages of a novel and a dream of becoming a writer.

“You’ve got what it takes,” Bill said matter-of-factly.

Ann Hood is the author of the bestselling novels The Knitting Circle, The Obituary Writer, and The Book That Matters Most; and the bestselling memoirs Kitchen Yarns: Notes on Life, Love and Food, and Comfort: A Journey Through Grief which was a NYT Editors Choice and named one of the top 10 non fiction books of 2008 by Entertainment Weekly. She has written The Treasure Chest series for middle readers and three YA novels, including Jude Banks, Super Hero. Hood has won two Pushcart Prizes, two Best American Food Writing Awards, and a Best American Travel Writing Award. Her essays have been among the 100 Notable Essays of the Year more than a dozen times and her books have been translated into twenty-two languages. She is the founding director of the low residency Newport MFA. Her most recent book is the memoir FLY GIRL, about her years as a TWA flight attendant. Read more about Ann on her website. 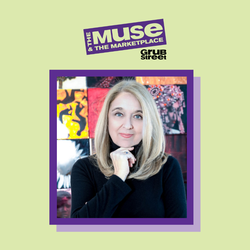