This year's conference theme is "Small Victories." We all know what the "big" victories are (landing an agent, snagging a book deal, or getting a flashy award), but this year we aim to celebrate the equally important, tiny, and often unseen victories of our writing lives. In anticipation of the conference, we've asked Muse 2021 presenting authors to describe one small victory they've had as a writer that nobody knows about. Our next presenter in the series is Alex Espinoza author of Cruising: An Intimate History of a Radical Pastime.

My debut novel, Still Water Saints, was released simultaneously in Spanish. A few years later, I was at a signing at a small community college when a student approached and said she had been assigned my book to read in her English class.

She was being raised by her single father.

Even though he barely finished middle school back in Mexico, he was very invested in her studies and would always stress the importance of a good education. When she mentioned my book, he did some research, found the Spanish version (he did not speak or read English), and decided to read it alongside his daughter. She said it was the first time he finished a novel cover to cover.

Every morning, over coffee, as he got ready for his factory job and she got ready to commute to campus, they’d have conversations about the chapters they read.

The issues covered in that book deal with body shaming, human sex trafficking, sexual identity, depression, and drug addiction. She admitted that her father, a staunch Catholic, was very conservative. But, throughout the reading of the book, over their conversations, he “began to see things differently,” she explained.

She thanked me profusely for having written a book that they could read together, and for helping influence her father’s views. I remember thinking that this was evidence of the true power of art: its ability to profoundly open our eyes to other possibilities beyond those we think we know.

Alex Espinoza earned his MFA from UC Irvine and is the author of the novels Still Water Saints and The Five Acts of Diego León, both from Random House. His newest book is Cruising: An Intimate History of a Radical Pastime. He’s written for the LA Times, the NY Times Magazine, Virginia Quarterly Review, and NPR's All Things Considered. The recipient of fellowships from the NEA and MacDowell, as well as an American Book Award from the Before Columbus Foundation, he is the Tomás Rivera Endowed Chair of Creative Writing at UC Riverside and is completing work on a new novel. He lives in Los Angeles with his partner, Kyle. 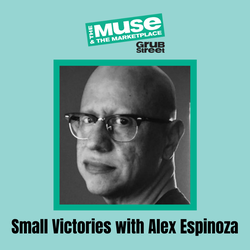 LGBTQ+ News from the Muse