The Muse and the Marketplace 2019 kicks off on April 5th at the Park Plaza Hotel in Boston. This year’s theme is writing in a time of upheaval — whether such upheaval is personal, political, artistic, or all of the above. In anticipation of the conference, we’ve asked Muse 2019 presenting authors to describe a time when it was impossible for them to write, but they wrote anyway. How did they do it? What did they write? Our next presenter in the series is Anuradha Bhagwati, author of Unbecoming: A Memoir of Disobedience.

I almost never finished my book, Unbecoming. When I received hurtful editorial feedback from an important reader, I shut down. I write a lot about sexual shame, desire and repression, and as I read her comments, I had the awful experience of feeling like I’d been shamed and judged. It wasn’t my reader’s intention—she was just careless with her delivery—but it didn’t matter. I felt like I was done writing. I considered selling my book back. I even had the talk with my agent about how some things are just not worth writing about, that nothing was worth my sanity, or my life.

It took weeks to open my laptop and start writing again. I decided this: if my book made just one woman or girl feel less shame or alienation, then it was worth it. I realized the real reason her comments triggered me was because I felt ashamed of the experiences I’d written about. I wanted to let go of that weight. I used her words to motivate me. I forgave and released us both. And I wrote.

You can catch Anuradha’s craft discussion, “Writing About Trauma Without Losing It” on Friday, April 5th at 11:45am and “Agents & Editors of Color Roundtable” on Saturday, April 6th at 1:00pm at the Muse. For all the latest Muse news, follow #Muse19.

Anuradha Kristina Bhagwati, MPP, RYT-500, is a former Marine Captain and Company Commander, and Marine Corps Martial Arts Instructor Trainer. She is the founder of Service Women’s Action Network, a non-profit organization that sued the Pentagon to end the Combat Exclusion Policy, wrote historic legislation to remove commander influence over sexual assault and felony cases, and ushered in dozens of legislative reforms to improve the military’s handling of sexual assault and harassment. Her work has received numerous national awards and has been covered throughout the media. Her writing has been featured in the New York Times, Washington Post, Politico, Foreign Affairs, and The New Republic.

Anuradha has been practicing yoga and meditation since 1999 and has been teaching vulnerable populations for over a decade. In 2008, she founded Yoga for Vets NYC, the longest running free yoga class for veterans in New York City. She is a leader in trauma-focused yoga and meditation instruction, and is a dedicated student of vipassana (the root of secular mindfulness meditation). A natural foods chef with a love for plant-based cooking, she recently graduated from the Natural Gourmet Institute for Health and Culinary Arts. She is an open water swimmer, animal lover, and vegan dessert enthusiast. She lives in New York City with her service dog, Duke.

Her first book, Unbecoming: A Memoir of Disobedience, will be published in 2019 by Atria, an imprint of Simon and Schuster. 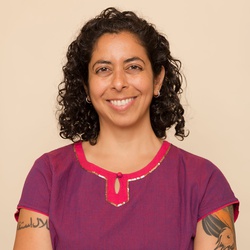