About
New Voices in Fiction

A Conversation with Lisa Borders and Pamela Wechsler, Author of Mission Hill

Only a week after its May 3rd publication, Pamela Wechsler’s first novel, Mission Hill, has garnered praise from Publisher’s Weekly, The Washington Post, Associated Press, and many other sources. The first of three books featuring Boston prosecutor Abby Endicott, the series was heralded by Boston Magazine as "...a Boston crime series to join the pantheon of Spenser and Patrick Kenzie."

Pam grew up in the Boston area and spent seventeen years as a prosecutor at the local, state and federal levels. After working as a trial attorney for the US Department of Justice, Pam moved to Los Angeles, and spent seven years as a writer and legal consultant for network television shows. She later rejoined a Boston area District Attorney’s Office and was contacted by producers for The Judge, a movie starring Robert Downey Jr. and Robert Duvall. Pam became the film’s on-set legal advisor, and it was there that Academy Award-winning writer Billy Bob Thornton suggested that she write a novel.

Pam will be reading from Mission Hill at Harvard Book Store on Thursday, May 12th at 7:00pm. For more events and information, visit her author website at pamelawechsler.com.

Lisa Borders: What was the first spark that started you writing Mission Hill? Did it begin with voice, character, a scene, or something else?

Pam Wechsler: Mission Hill began with voice. The novel actually started out as a short story. I had spent a lot of time working on TV scripts, and I wanted to try something different. I wanted to get inside a character’s head; you can’t really have an internal dialogue in a script, so I decided to write a short story. A few years later, I took the voice that I had created and grew it into the book that became Mission Hill.

LB: You started writing your book in January of 2014 and sold it in October that year. I’ve never known a novelist who finished and sold a book so fast, and frankly, I’m in awe! How did you accomplish that in terms of process? How much time did you spend writing per day (or per week)? How much revising did you have to do on your first draft — or do you revise as you go along?

PW: Before I started writing, I had a very general idea about the plot. I knew it was going to be about the murder of a prosecutor, and I had a couple of twists in mind. I knew that I wanted the book to have both an investigation and a trial. And I wanted a contrast between the protagonist’s personal life and her career choice. That was about it. I let the rest happen as I went along.

I write full time. Sometimes, that means sitting at my laptop for ten hours, fully engrossed. Other times, it means pacing around my apartment all day without writing a word, or throwing in the towel and going to the movies. I count all of that as writing too, because I’m usually thinking about plot and character, or looking for inspiration. At least that’s what I tell myself!

I always revise as I go. I have to be excited about a chapter before I can let it go and move on to the next one. That’s just how I’m wired.

LB: You mentioned in another interview that your father is your first reader, but you’ve also taken a number of GrubStreet workshops. How do those different sources of feedback inform your revision decisions?

PW: Since I edit my work as I go along, I pretty much workshop in real time. That’s not to say that I present pages that are rough or unpolished; I spend a lot of time before each class, rewriting and reediting the pages that I plan to read. I will keep at it until it feels right, which means it advances the plot and the characters, and there’s something fun or impactful going on. Since I’m not too far ahead of what I’m presenting, if someone points out a major plot hole, or offers a great suggestion, it’s an easy fix. Then, when I have a complete draft, I ask my father to give it a read.

LB: The majority of the writers I know (myself included) end up writing early draft scenes that ultimately don’t belong in the book — that is, they don’t advance the plot, develop characters or inject tension. That’s why as an instructor I encourage writers not to spend time micro-editing early draft scenes. But it sounds like editing each scene as you went along worked well for you. I wonder if your process was different because you started with a strong idea of your plot, and an innate sense of which scenes were necessary to the novel? Did you ever start a scene, realize it wasn’t advancing the plot, and then cut it without bringing it to class?

PW: Writing for television gave me a feel for the rhythm of a story. Now, when I’m writing this series, I can sense where Abby needs to lose a key piece of evidence, or when she should go home and spend some time with her boyfriend. I also think, for better or worse, the genre that I’m working in gives a certain structure.

I edit things out all the time. I’ve started scenes and then cut them before — or after — class, but I can usually tell pretty quickly when something needs to go.

LB: I find writers in workshops often struggle with how to handle contradictory feedback. As a veteran of GrubStreet workshops, do you have any insights into how to decide what advice to take and what to discard?

PW: Sometimes feedback is spot on — describe the setting, or tell us what she’s thinking. Other times, not so much. I never discard feedback out of hand, however, even if it sounds ridiculous in the moment. I don’t end up taking every piece of advice, but if someone reads my work and gives me a note, I think about it.

When it comes to contradictory feedback, I find that a good instructor (like you!) can guide the discussion in a way that gets to the core of the disagreement. After some back and forth, two seemingly irreconcilable opinions may no longer be so far apart. For me, the point is that there’s an issue to consider, something isn’t working for someone. Then, it’s up to me to decide what to do about it.

LB: Mission Hill is the first book in a series. Can you tell us about Book #2? Does it have a title yet? What’s it about?

PW: Book #2 is with my editor and I’m eagerly awaiting her notes. It’s about a serial killer who targets college students. There is also a political storyline — Abby’s boss is running for mayor and Abby is being considered as his replacement. And there’s a personal thread: Abby’s trust fund disbursements are cut off.

Since Boston is one of the main characters in the series, I’m planning to name all of the books after a location in Boston, hopefully one with a double meaning. I have a working title, but it may change — so I’m not ready to give it up!

LB: I’ve heard you mention that your mother was a writer. Could you tell us about her and her work — and also, how her writing informed or affected your own work?

PW: My mother wrote book reviews, profiles, and personal essays, mostly for our local newspaper. I was always impressed by how much joy she derived from writing. Recently, I went back and read some of my mother’s essays, and was struck by the similarities in both substance and style. I had no memory of this piece but it could easily be describing Abby as a child:

Each evening when she was five, my daughter would lay out her clothes for school the following day. She had a clear understanding of how she wanted to look, of her style, and as the clothes we bought together reflected her taste, this bedtime ritual was one she enjoyed. She lingered over her choices, matching different blouses and skirts and tights, and not because she was confused. It was, rather, a way to prolong the enjoyment. Often, after she had selected what she would wear, she’d pick out an outfit for her brother, too. It was a kind of accessorizing. After all, they would be walking down the street together.

LB: I love that! She wrote that about you? Was this a detail of your childhood that you remembered, or did it subconsciously work its way into Abby’s character?

PW: Yes, she was writing about me. I had forgotten all about this ritual, until a few weeks ago, when I found the passage. It must have subconsciously worked its way into Abby’s character. It was so much fun to discover this piece. I can see how much I am like my mother, and I also have more insight into how Abby came to be.

Harvard Book Store is a unique and special place to shop—a locally owned, independently run Cambridge landmark since 1932. We are known for our extraordinary selection of new, used, and remaindered books, an award-winning author event series, and a history of innovation—including print-on-demand services, local partnerships, and digital media. Visit us in Cambridge or online to browse our shelves, our staff recommendations, and our author events calendar. Sign up for our weekly e-mail newsletter, which includes updates on sales, events, and featured books. Thanks for shopping at Harvard Book Store! 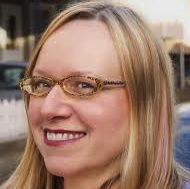 Lisa Borders’ second novel, The Fifty-First State, was published by Engine Books in 2013. Her first novel, Cloud Cuckoo Land, was chosen by Pat Conroy as the winner of River City Publishing’s Fred Bonnie Award and received fiction honors in the 2003 Massachusetts Book Awards. Lisa has published humor in McSweeney’s, essays in The Rumpus and several anthologies, and short stories in Washington Square, Black Warrior Review, Painted Bride Quarterly and other journals. She has taught creative writing since 1997, shifting her focus to the novel when she developed GrubStreet’s Novel in Progress courses in 2005. She also co-developed and co-taught GrubStreet’s Novel Incubator from 2011 – 2013, and developed and led the Novel Generator from 2014-2017. She now teaches in the University of Arkansas at Monticello’s online MFA program. For more information on Lisa and her work, visit lisaborders.com.

See other articles by Lisa Borders