"I had to be very precise, almost like an archer with a bow": Sara Shukla Interviews Author Anna Solomon About THE BOOK OF V.

Anna Solomon’s The Book of V. is a marvel. It’s both expansive and tightly woven, intensely intimate and shared. It braids the individual stories of three women—Lily in 2016 Brooklyn, Vee in Watergate-era Washington D.C., and Esther in ancient Persia—into a propulsive examination of power, desire, expectation, and identity. It’s about the choices we make as much as the choices we think we have. It’s impossible to put down, or to stop thinking about once you do.

In addition to multiple starred reviews and most anticipated lists, the audiobook won an Earphone Award from AudioFile Magazine. And last Friday, it’s gorgeous cover lit up Times Square as Good Morning America’s Book Club pick for May.

At a time when strength and generous spirit feel so necessary, I’m thrilled to wish a very happy pub day to Anna and The Book of V.!

SARA SHUKLA: What surprised and hooked me from the start of your book was the voice. There’s this mix of gravity and playfulness, like someone is telling me an adult bedtime story. You had me at, “The rule for drinking was, Drink!” which refers to a political party in the 1970’s. How did you land on the way you wanted to tell this story?

ANNA SOLOMON: It was definitely a big part of the challenge of figuring out how this book was going to work, and how I was going to weave these three very, very different stories together. I understood that it needed to happen on a plot level, but it also needed to happen on a narrative, voice level. It’s interesting that you pointed out the “rule for drinking was, Drink!” bit, because that actually comes directly from a translation of the Book of Esther. I found it so wonderful and hilarious, as much of the Book of Esther turns out to be. And that particular line was a very helpful little bit in figuring out the voice. Like, who is saying this? Who is saying that the rule for drinking is drink? Oh, I think that’s my narrator.

It’s a kind of permission granted. Like—hey, you can have fun with this.

Totally. It’s like this very expansive, judgmental, allowed-to-go-anywhere voice that can traverse these worlds. When a chapter opens with, “Dusk here, too,” it’s referring to the last chapter, so it develops that connective tissue. But it’s much more about the sensibility of this voice to allow for a sense of confidence in the reader that there is a sort of guiding principle here, a guiding intelligence to the overall project.

The pieces that we see of the characters’ lives are so beautifully concentrated—you show us layers of power, desire, fear and anger in a moment’s interaction. I’m thinking of Vee and Alex in the kitchen, or Lily at the sewing party. One of my favorites scenes was Lily and her husband Adam eating dinner—the olives, the laundry! How did you narrow down which moments to braid together between the three narratives to tell these full stories? And by how, I also mean, wow. It’s so well-executed.

I think one of the really beautiful challenges of writing a book that did weave these three different stories together was that I had to be so precise about which scenes I included for each of them. If you really break the book down, you don’t get that much time with each of them, at least as an author. You have to do a lot with every single scene.

And so, on the one hand, I had to be very precise, almost like an archer with a bow, like what moment will do what I want to do? But on the other, a lot of it was instinctual. I find that in general, for me, novel writing is very much like I’m moving between instinct and editor self: this scene comes up for me, then what does it do in the story? There’s a symbiotic relationship where I’m trying to get a sense of whether the scene that I’m instinctually moved to write in fact functions in the book in a way that justifies its presence.

I think the book really is about that, and I came into control of that not just as I wrote, but as I revised and revised. I came to understand that, oh, this is about story telling for each one of these women. All of these women are coming into their own way of telling their story. That is in some way, at its very core, what the book is about: what does it mean to take charge of your own story.

At two points, a character says, “Here I am.” Abraham says this when he presents himself to God after God asks him to sacrifice his son, and I know that part from Jonathan Safran Foer’s book of the same name, about a male midlife crisis. In your book, it’s said by two female characters. How do you think the words change in that context?

You’re reminding me in asking this question that when I wrote this book, it was always called, in my mind, The Book of V., but I didn’t think anyone would publish it with that title. One of the titles that I was holding onto for a while was Here We Are, and it was very much in response to, not only the original in the Bible but also to Jonathan Safran Foer’s use of it. My book engages with the question of how women have been pitted against each other, and also how we’ve pitted ourselves against one other. I think it really leans toward or works its way toward connection between women as opposed to competition.

It’s also a vision of personhood as being something that’s larger than an individual just coming into themselves and being who they are—which is itself I think a very American idea, and maybe to a greater degree more a male one than a female one. In each of those moments that my characters assert that, it’s a coming out of the conventions and psychological habits of the we-ness and into asserting that individual I. The emphasis is on not just being seen or being present to the public, but to oneself, like what it means for a woman to become clearer about who she is to herself.

Let’s talk about sex and power. In an early scene with her husband, Vee thinks, “if she loses, he wins.” Esther’s power is said to be in her natural beauty, but it’s never that simple. And in twenty-first century Brooklyn, there’s still a remarkably quick pivot between desire and rage. What I kept thinking was, we want partners who want to do the dishes, and yet we lust after Hal the fisherman. There’s this layering of what we want, what we think we want, what we’ve worked so hard to achieve, and yet it’s still a power struggle and a battle.

One of the questions that drove me to want to write the book was—I was born in the 1970s, on the tail end of the second wave women’s movement at a moment that was sort of promising equality, sexual liberation, and a sense that you would marry for love only, that marriage would be all about what you actually desired, and that there would be equity, and that power was somehow not going to play into it. And I’m middle-aged now, I have kids, I’ve been married for long enough to know a little bit about it. And I thought, wait a second, this doesn’t feel as different from my mother’s version of this, or even my grandmother’s version of this, than I thought it would—or that they told me it would.

How would Lily handle distance learning and quarantine?

I love this question. It makes me so happy. I think she would go nuts! I think it would very much be a last straw for her. Much like it might be for me, if I didn’t also have work that meant something to me that I’m doing along with all of this totally unexpected—the parenting, the schooling, all of it. Given how many times during this experience in the last six to eight weeks I’ve come to what feels like a wall, she’d definitely be at the wall a lot. Especially in her apartment. There’s no way to get any space from anyone else.

You curate an Instagram called unkempt_real_life for “women’s untidied, unvarnished domestic spaces.” It’s an unapologetic celebration of mess. What do you like most about it? What do you think people respond to?

It’s been so much fun. It’s such a concrete way of saying, hey, let’s gather and put out there what it’s really like, these moments that celebrate—and are really honest about—a shitshow, which is often where things are at in a given day. It’s also a reaction against the “curation” that’s being done on social media, where before you take a picture of your kid, you tidy up, and all these houses look like they’re out of Real Simple magazine, and what’s wrong with me? It’s that “what’s wrong with me?” that I was trying to speak to.

My own mother, just like Lily’s mother, actually had a sampler that hung on the back of our bathroom door that said, “A well-kept house is the sign of an ill-spent life.” I grew up just like Lily looking at that sign. And it was complicated, as it is for her, but my mother talks about how women would come to our house and feel really overjoyed at seeing it. So, it’s just like releasing us from shame and pressure.

If there’s a bright spot to pubbing in a pandemic, it’s that anyone, anywhere, can attend your events! Where and when can readers find you on tour, and how can they buy your book from home?

Yes! The book is available wherever books are sold–but if you’re able to support your local bookstore by buying it directly from them or on bookshop.org, that would get you the story and help ensure that our indies survive the pandemic! Also there’s a fantastic audiobook that’s already won an award if you’re into that. Finally, I’ve got a bunch of events happening, and I’m going to be answering reader questions every Sunday on my Instagram: @thisannasolomon — I’d love to hear from you!

Anna Solomon is the author of three novels—The Book of V., Leaving Lucy Pear, and The Little Bride—and a two-time winner of the Pushcart Prize. Her short fiction and essays have appeared in The New York Times Magazine, One Story, Ploughshares, and more. Co-editor with Eleanor Henderson of Labor Day: True Birth Stories by Today’s Best Women Writers, Anna was born and raised in Gloucester, Massachusetts, and lives in Brooklyn with her husband and two children.

See other articles by Sara Shukla 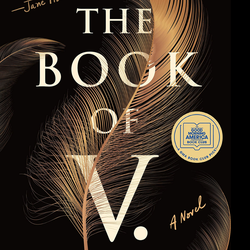