Find a Way to Protect that Creative Space Within: An Interview with Author Louise Miller

Louise Miller, author of The City Baker's Guide to Country Living (Pamela Dorman Books/Viking/Penguin, August 2016), received a scholarship in 2012 to attend GrubStreet's Novel Incubator Program, where she worked on the final revisions of the novel, before signing with an agent and an editor she met through the Muse and the Marketplace Conference. I caught up with her to talk all things writing--the struggles, the successes, the challenges--and find out what it's like to have a publishing dream become a reality.

In a recent blog post, you mentioned that when you first came to the Muse, you were struggling to take yourself seriously as a writer. When did that change for you (or did it?) and what gave you the confidence to start thinking of yourself as “writer”?

I’m happy to say that it did change–I do think of myself as a writer. It took time and happened in tiny increments. My biggest hurdle was that I had a lot of hang-ups about my lack of formal education. To me a writer with a capital W had an MFA and a bunch of publishing credits in literary magazines under their belt, and since I don’t have an undergraduate degree and do not write short stories, neither of those achievements were within my reach.

Finishing the first draft of my novel helped a lot. But what really made me able to see myself as a writer was getting into and participating in the Novel Incubator program. There I was, with nine other writers and our instructor Michelle Hoover. If I took them and their work seriously, I had to take myself and my own work seriously. There was a moment during the program when we were all out having drinks, that I realized I had stopped thinking of myself as a baker who happened to have written a book and had started thinking of myself as a writer. It was around this time that I started thinking about the next books I wanted to work on as well.

By day, you’re a baker. How did you find your way to writing? What made you want—or need—to write?

I first knew I wanted to write fiction when I was in my early twenties in art school. A friend gave me a paperback collection of Raymond Carver stories, and it was the first time I read stories with characters that felt very familiar to me. That collection drove home that everybody’s stories were worth telling. I had always been a big reader and a journal writer, but it was that story collection that inspired me to want to write, which might surprise a lot of people since my work isn’t at all like Carver’s!

I never stopped wanting to write, but I didn’t actually pursue it in a serious way until I was in my late thirties. My father died suddenly when I was twenty-two, and my life took many turns because of his death. I was thirty-eight and facing more losses when I realized that it was time to either start writing or let the dream go.

A lot of writers find it difficult to maintain a balance between making rent and making time to write. As a professional woman who managed to finish a book on the margins of another job, what advice would you give to writers in a similar position?

I work anywhere between 35-65 hours a week, so the first thing I want to say is that it can be done. Don’t let working get in your way.

I think the best thing a person can do is to throw away any sense of preciousness about when and where they write. Early on I used to have a lot of rules about writing–It had to be in the morning, I had to have several hours free, I had to be alone, I had to have a clean, quiet space, etc. As you can imagine, this meant I hardly ever wrote. I finally learned to let go of all of it. Writing is cumulative. Write 1 page–just 250 words– a day, and you will have a novel draft in a year. You can write a short scene on the bus on the way to work, or during your lunch break. Some of the scenes of THE CITY BAKER’S GUIDE TO COUNTRY LIVING were written in the women’s locker room at my job. Don’t get me wrong, I have preferences, but some of my worst, most distracted writing sessions have been when I had hours to spend in the Athenaeum, and some of my best, most surprising writing sessions have taken place in the kitchen in the middle of a busy lunch shift. Learn to be as flexible as possible.

What do you think are the biggest challenges aspiring writers face?

I think one of the biggest challenges for any writer, but especially for writers who are just starting out, is to find a way to protect that creative space inside you where you write from–the space that is free from rules, where you can make radical stuff up and fall in love with the sound of words and let go of any expectations.

There is so much information readily available about publishing these days–go online and you will find endless articles that will tell you word count rules, marketplace trends, genre rules, what agents want, what agents don’t want–I have been in workshops with new writers who already sounded like industry experts! I think that worrying about these things can be really inhibiting. You have to be able to follow the story you are writing, and to feel free enough to make mistakes. Besides, there are so many excellent examples of books that broke the rules. Just look at Garth Hallberg’s City on Fire. What if he had listened to the rule that debut literary fiction will never be looked at by an agent if it is over 400 pages?

Your publication story—meeting a top editor at a major publishing house, landing a two-book deal—is, for many writers, a dream scenario. What has been most exciting or rewarding about the process?

Can I answer both?

The most rewarding experience by far has been working with my editor, Pam Dorman. I had revised my novel at least five times before I began querying agents, and I did another revision for my agent before we started the submission process. But my book would never have become what it is now without Pam. She has a wonderful way of asking just the right questions. With each edit I could feel her encouraging me to try harder, to dig a little deeper, to do better. When I finished the revision for her (which including cutting about 20,000 words) I felt as if I had received an incredible education. And I am so proud of the novel it has become.

As for one of the most exciting moments–of course, the week that we sold the novel (and the 2nd novel!) to Pamela Dorman Books was absolutely one of the most thrilling weeks of my life. But one of my favorite moments so far happened just a couple of weeks ago. I paid my first visit to the Viking offices in New York, which was exciting all on its own. As I sat in Pam’s office, I noticed a bookshelf next to her desk with manuscripts stacked in rows. Each manuscript was labeled with a big yellow Post-it note. There sat my manuscript, labeled Miller. And next to mine–Moyes. As in Jojo. One of my all-time favorite novelists. Seeing our books next to each other really drove home the fact that my dream was coming true.

Any big plans for the book launch?

I harbor some serious book launch daydreams! My novel takes place in rural Vermont, and there is a lot of traditional fiddle and banjo music at the heart of it, so I dream of having a big barn dance, with contra dancing–if only I could find a barn to rent in Boston. But there will definitely be a party of some sort, and the publicity and marketing folks at Viking have some delightful, creative ideas for events. I can’t wait!

Louise Miller is a writer and pastry chef living in Boston, MA. She received a scholarship to attend Grub Street’s Novel Incubator program, where she revised her first novel. Her debut, The City Baker's Guide to Country Living, is forthcoming from Pamela Dorman Books (Viking/Penguin Random House) in August 2016. She is an art school dropout, an amateur flower gardener, an old-time banjo player, an obsessive movie goer, and a champion of old dogs. 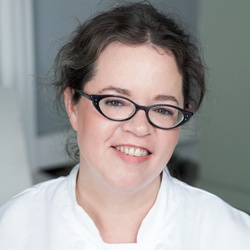