Join Porter Square Books and Grubstreet TOMORROW, September 30th at 7PM (EST) the latest installment of the Grubbie Debuts series, featuring GrubStreet student M. Soledad Caballero for the launch of her debut collection, I Was a Bell. Soledad will be joined in conversation by GrubStreet instructor Rebecca Morgan Frank (Oh You Robot Saints)! This event is free and open to all, hosted on Crowdcast. Register here.

About I Was a Bell

In this collection, Caballero imagines how memory frames and reshapes the present, how memory illuminates and limits the stories of ourselves, and how, despite the passage of time, primal moments in the past are the ghosts and echoes of our present. These poems interweave an early childhood lived in another country and in another language with experiences of immigration and family histories in the United States. They create connections between a child's naive perspective of dictatorship and an adult perspective informed by bodily illness and political knowledge. Ultimately, Caballero traces a lineage of memory, exploring how present moments unearth the past that ripples through them. This collection does not reconcile the past and the present. Instead, these poems remind us that how we ask questions about ourselves, our histories, and our bodies is what creates our identities, our traumas, and our future hopes and possibilities.

"Caballero bears unflinching witness to the emotional trauma inherited from war-ravaged Chile to the exiled plains of Oklahoma. As though to witness is to love. These poems negotiate the transitions of language, memory, country, her battle with cancer, counterbalancing the violence from which she fled with a transformative devotion to details." — Richard Blanco, fifth Presidential Inaugural Poet

M. Soledad Caballero is Professor of English and co-chair of the Women’s Gender and Sexuality Studies Program at Allegheny College. Her scholarship focuses on British Romanticism, travel writing, WGSS, and interdisciplinarity. She is a Macondo fellow, a CantoMundo fellow, has been nominated for three Pushcart Prizes, has been a finalist for the Missouri Review's Jeffry E. Smith poetry prize, a finalist for the Lucille Medwick Memorial Award, was winner of the 2019 Joy Harjo poetry contest sponsored by Cutthroat: A Journal of the Arts, and winner of SWWIM’s SWWIM-For-the-Fun-of-It contest. Her poems have appeared in the Missouri Review, the Iron Horse Literary Review, the Crab Orchard Review, and other venues. Her first collection, I Was a Bell, won the 2019 Benjamin Saltman poetry prize and is published by Red Hen Press. She is an avid tv watcher and cheese eater, and is a terrible birder. She splits her time between Pittsburgh, PA and Meadville, PA.

Rebecca Morgan Frank is the author of four collections of poems, including the recent Oh You Robot Saints!, a New York Times New and Notable book, and Little Murders Everywhere, a finalist for the Kate Tufts Discovery Award. Her poems have appeared such places as The New Yorker, American Poetry Review, Ploughshares, The Kenyon Review, and the Academy of American Poets Poem-a-Day, and her collaborations with composers have been performed widely. Co-founder and editor of the online magazine Memorious, she serves on the board of the National Book Critics Circle and teaches in the MFA Program in Prose & Poetry at Northwestern University. She is the current writer-in-residence at the Ernest Hemingway Birthplace in Oak Park, Illinois.

You can register for this free event here. 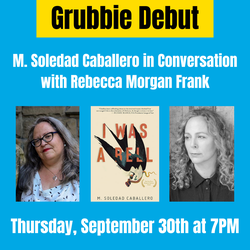